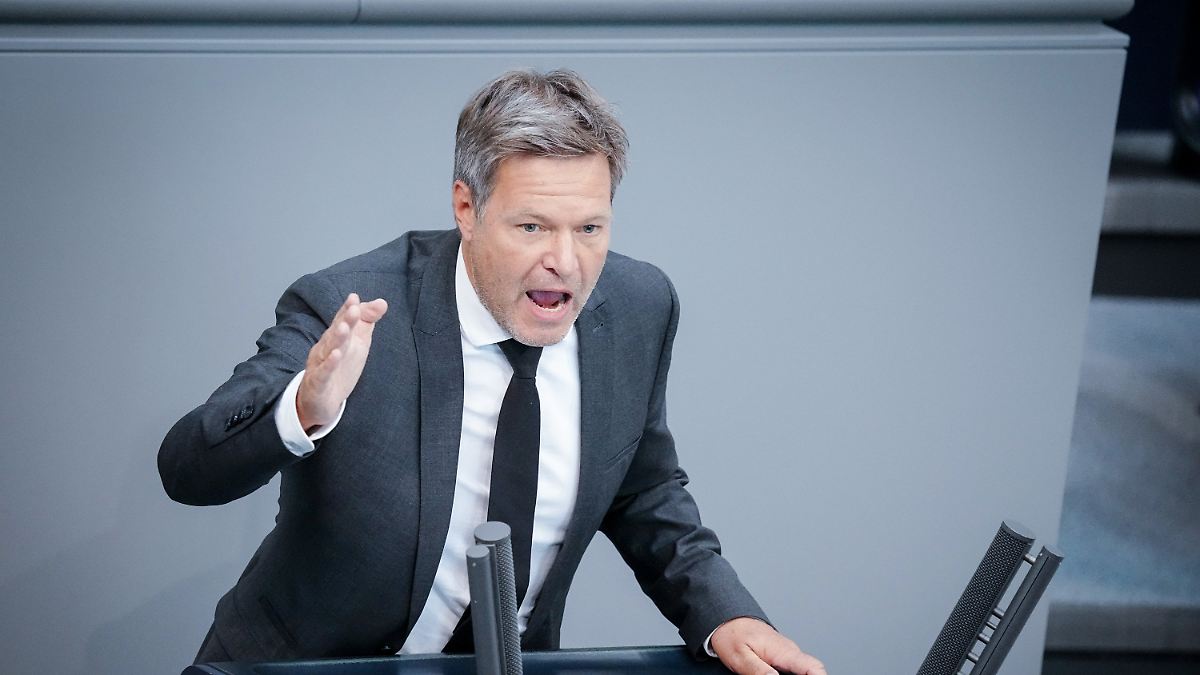 “Are we at the football stadium?”
Habeck has an angry speech about the gas drain

As the federal government clings to the gas tax despite the nationalization of Uniper, tempers are rising in the Bundestag. The economy minister is visibly upset with the “must go” attitude of the opposition, which has not come up with any alternative proposal. “What’s coming up instead?” Habeck fumes.

Federal Economy Minister Robert Habeck had a heated exchange of blows with the opposition in the Bundestag over the planned gas tax. In the current gas tax hour, which was called at short notice, Habeck accused the Union faction of being the “obligatory opposition” without proposing an alternative to the planned tax on gas customers.

“What we hear from the opposition…: ‘The surcharge for gas must go.’ Are we here in a football stadium or is this a demo?” said Habeck, who was summoned to the meeting. “But this is not politics. What comes instead? If you have already decided not to be a constructive opposition, then you should have the courage to speak the truth and assert your own propositions. And you don’t do that.”

Because gas companies such as Uniper, which suffer from a lack of Russian gas supplies, can be helped in other ways, for example by borrowing. “But then you have to stand here and say: Instead of the gas levy, we want to immediately get around 35 billion euros or capitalize companies. But you don’t do that,” Habeck accused the opposition, visibly affected. He lacks honesty and responsibility in the debate.

With regard to the impending nationalization of the gas company Uniper, the head of the trade union parliamentary group, Andreas Jung, once again pushed for the abolition of the controversial gas tax. Tomorrow, Thursday, his parliamentary group in the Bundestag will request the abolition of the gas tax in a roll-call vote. It was all the more urgent after the German government announced this morning that it wanted to nationalize the ailing gas importer Uniper. “This gas surcharge has to go. It was completely wrong from the beginning… it’s totally screwed up in implementation and with nationalization it’s also legally challenged, but it’s not politically sustainable in any way,” Jung said.

The allocation has no justification after the nationalization of Uniper

The CDU politician also complained that, according to Federal Finance Minister Christian Lindner, these legal concerns have been clarified, while the Economy Minister rightly sees the need for clarification. Due to concerns about the financial constitutional basis of the gas tax, Habeck distanced himself from the gas tax. “You want to get rid of the ghosts you’ve evoked because you realize it’s not working,” says Jung.