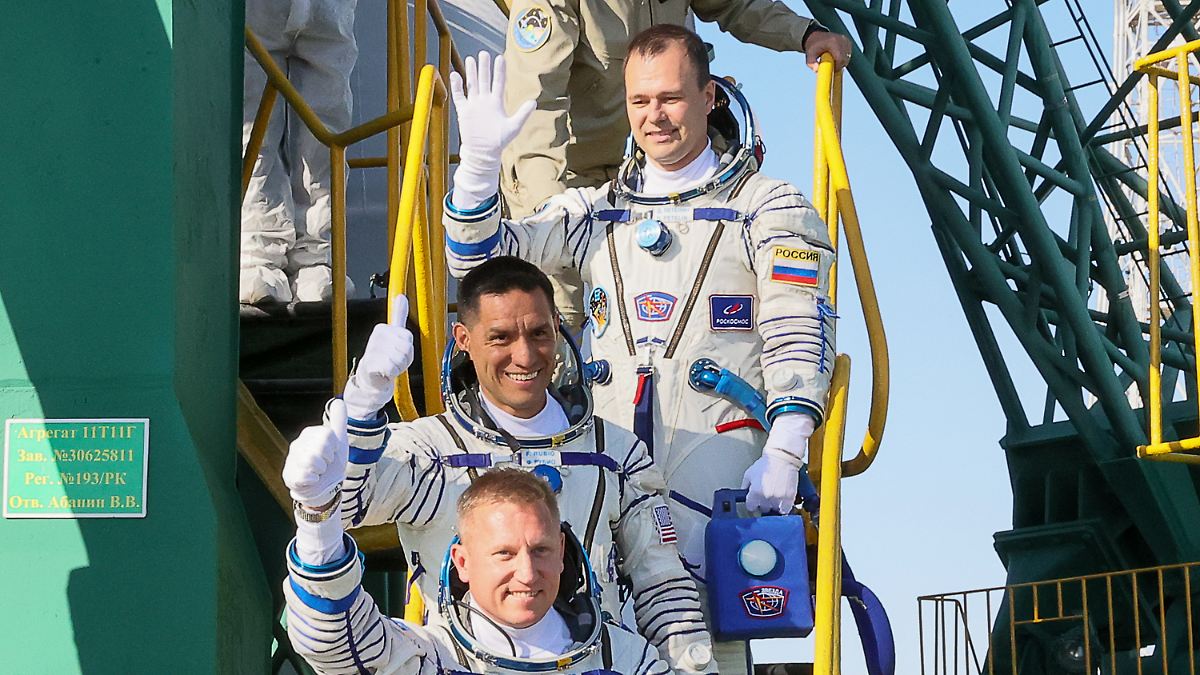 The war in Ukraine is raising tensions between the US and Russia. So far, however, the countries have not resented cooperation in space travel. For the first time since the invasion began, they send a team together to the International Space Station. The landing was successful.

For the first time ever, an American astronaut and two cosmonauts flew into space together in a Soyuz launch vehicle at a time of great political tension in their countries. On board the Soyuz space capsule, cosmonauts Sergey Prokopyev and Dmitry Petelin and NASA astronaut Frank Rubio took off at 15:55 CEST from the Russian Baikonur Cosmodrome in the steppes of the Republic of Kazakhstan in Central Asia.

The Russian space agency Roskosmos showed a live broadcast of the launch of the International Space Station ISS. According to Russian information, a good three hours later at 19:11 CEST, the spacecraft docked at the human base at an altitude of 400 kilometers. Because of this, the crew switched to manual control. NASA spoke of “a good launch into the sunset”. The local time on Baikonur, where the American delegation was watching the mission, was 18:55. “The crew is fine,” said a NASA commentator.

It is the first joint flight since the start of Russia’s war of aggression against Ukraine on February 24. All stages of the launch vehicle ignited smoothly, it said. The solar sails on the Soyuz capsule would deploy “perfectly” for the next flight to the ISS.

The flight to humanity’s base at an altitude of 400 kilometers should take around three hours. The crew also has 120 kilograms of supplies for the ISS on board, including hygiene and medical supplies, scientific apparatus and cosmonauts’ personal belongings. The 46-year-old Rubio in Baikonur said before the start that he was looking forward to the view of the country from there.

He was excited about “the darkness and how the stars look from there”. Rubio has previously said that space travel is a way of working together, even in times of political tension. The crew did not talk about the war in advance, but mainly about personal matters and the everyday life of the astronauts. They all made it clear that they would miss their families the most during their six months on the ISS.

The hardest part for him personally will be the long separation from his wife and four children, said the Los Angeles-born astronaut Rubio, who has been with NASA since 2017 and is now flying into space for the first time. He will take some family photos with him to the ISS. “It’s an honor to follow in the footsteps of previous astronauts,” he said before launch.

Russia’s war against Ukraine is putting further pressure on already complicated relations between Moscow and Washington. Russia complains that sanctions imposed by the US and the EU in the wake of the war make it difficult to work in space, including the production of rockets that can be used for military purposes. At times, cooperation was on the edge.

Russia wants to withdraw from the ISS project

The two cosmonauts Prokopjev and Petelin are now traveling with Rubio in the Soyuz MS-22 space capsule to the human base. In October, Russian cosmonaut Anna Kikina is scheduled to fly from the US to the ISS aboard Elon Musk’s SpaceX “Crew Dragon” capsule. The flights should give hope that cooperation on the ISS will continue in the years to come. Russia recently announced that it would end the project after 2024, but did not specify a date.

Cosmonaut Prokopyev stated before the start of the 68th ISS mission: “The program is pretty busy – in addition to quick docking, five spacewalks are planned.” In addition, 48 experiments are planned, including work with a 3D printer in zero gravity. The plan is therefore to print different figurines from different materials. This could lead to a new generation of 3D printers in the future.

While Petelin and Rubio are flying for the first time, it is Prokopyev’s second flight into space. He said, “We’re all playing football. We’re sure to find the ball in space.” He himself played tennis and badminton in zero gravity. Otherwise, the daily routine is the same as on Earth: work during the day, quiet at night from 11 pm to 6 am.

“I sleep better than on Earth,” said the 47-year-old. Three astronauts will not be alone on the ISS: Expedition 67 commander Oleg Artemyev, cosmonauts Denis Matveyev and Sergey Korsakov, as well as NASA astronauts Bob Hines, Kjell Lindgren, Jessica Watkins and Italian Samantha Cristoforetti aboard the European Space Agency Esa.