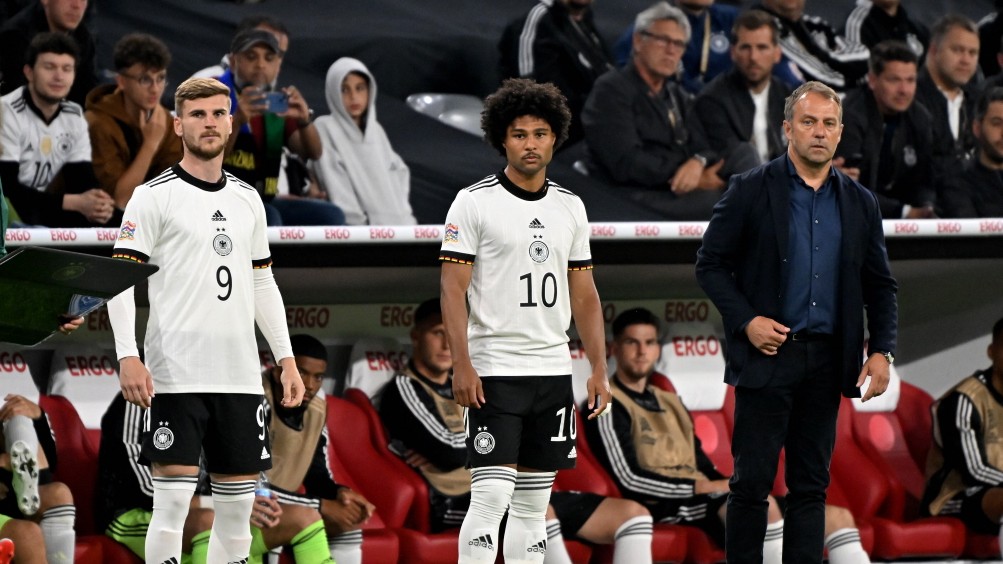 All were determined, ready and willing to embark on the perilous journey to the place; after a wave of illnesses the previous day, that was the success story that national coach Hansi Flick was able to announce when he appeared in front of the audience in Frankfurt. on Thursday and made arrangements to explain the Nations League home game against Hungary. The game takes place in Leipzig and is scheduled for Friday evening at 20:45. But before the national team can take the field in Saxony, they will first have to deal with an opponent who possesses almost as many treacherous tricks as the Hungarians, who have recently been named Europe’s best team. To make matters worse, most German players have little experience with difficulties such as “damage to the dining rooms”, “faulty signal box” or, especially dreaded, “detour due to lane closure”.

The fact that the national football players took a three-hour train ride on Thursday instead of taking a private plane as before was not the initiative of the team’s board. The travel technique of the DFB elite is the result of insight and adaptation to new social norms. A year ago, when Hansi Flick had just started his service, a plane was used to transfer him from Stuttgart to Basel, and for this the DFB received a lot of criticism. Meanwhile, the federation strives every day to meet the demands of modern virtue, and that’s why expensive footballers now have to travel by train like everyone else.

Those involved agreed without audible protest that they would probably walk the 400 kilometers if necessary as long as they were given a personal ticket to the World Cup. The World Cup is “the biggest thing there is for every footballer,” Gladbacher Jonas Hofmann has just declared as a representative of his kind.

Coach Hansi Flick is taking advantage of this nostalgia to show that his staff’s planning for the tournament is far from over. He expects “development from everyone” before the final World Cup bid deadline, he stressed on Thursday. “Everyone still has to work on themselves and screw up one percentage point or another,” Flick explained.

The problem is often the “final pass”, which “often comes too late or not at all,” says the national coach.

A circular of sorts will be sent soon on the instructions of the national coach. The recipients are up to 50 players who Flick names in a provisional World Cup squad, which he then reports to FIFA. The coach, as he openly assured, wants to completely complete the framework defined by the world association, maybe in October some specialists who did not think about it, can suddenly hope for the world championship. According to Flick, each individual will be notified so that they are ready to leave for Arabia on November 14. Until then, the list is at least open to followers. The actual tournament squad consists of 26 members, three more than in previous tournaments.

Surprise guests are not only conceivable, but probable, and it is quite obvious that it is primarily a classic goalscorer. The problem with the national team now and probably in the coming years is in the middle of the attack, the crisis is already starting with the lack of resources, as reported by Flick. “Those are the things we see in training. good goalkeepers, central defenders, midfielders, wide range of wingers. But the center, we don’t have that high quality there.”

The trainer followed this observation with a sentence that sounded as if he had just learned of the dangerous implications of his statement. “But we are very happy with Timo Werner,” said Flick, adding another ambiguity: “It would be good for him to reward himself.”

The name Simon Terodde entered the field in the spring, and now there could be another Qatari surprise guest

The DFB team scored nine goals in four Nations League games, including five in the home win against Italy. With Werner and Serge Gnabry currently without goalscorers, Flick does not seem convinced of Wolfsburg’s Lukas Nmecha. It wasn’t Werner’s fault, he claims instead. “He showed us that he is very dangerous.” The problem is often the final top transfer, which “often comes too late or not at all.” Addresses: Thomas Muller, Leroy Sane or Jamal Musiala.

Timo Werner himself will also have a suggestion on this topic. Between all the fast guys buzzing around the penalty area, a permanent representative in the penalty area can be useful from time to time, he says and asks his opponent. Leipzig striker. “Who could also take high balls, why not?”

Flick dropped the name of 34-year-old Simon Terodde in the spring, but the other promoted team’s top scorer currently seems to be attracting more interest from the DFB. As for 29-year-old Nikla Fühlkrug, the most successful German striker in the league, he “can’t answer yes or no,” explained Flick, while leaning towards yes. “It could be that we take a player with us for a certain situation.” Fulkrug simply denied the fact that he “doesn’t want to philosophize about things that don’t exist.” But there is no need to doubt that any vehicle in Qatar would be fine with it.