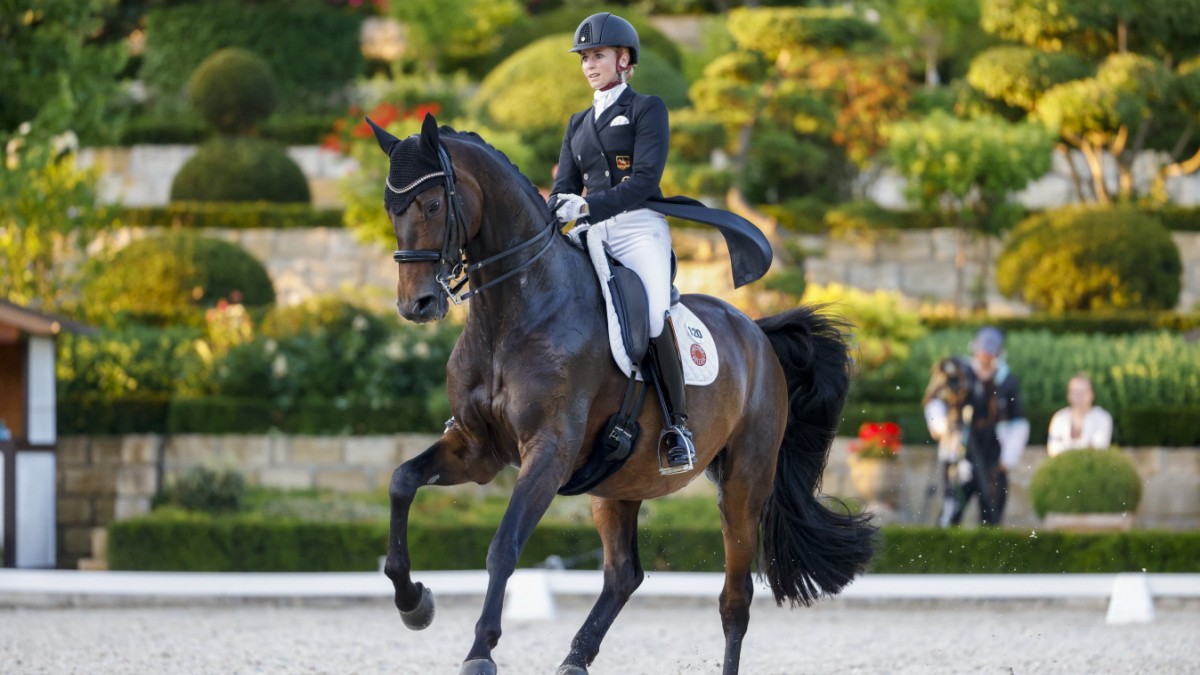 A pierced-eared horse and its rider galloped through a sunny autumn day, a must-see picture on social media. It says: Jessica von Bredow-Werndl, European and Olympic champion, is ready to return to competitive sports after the birth of her daughter Ella. But this weekend at the Ludwigsburg International Festival, the woman who has dominated the world’s hairdressing scene for the past two years has gone missing. He would like to show himself in the saddle after the baby break.

But the International Equestrian Federation (FEI) and the German Equestrian Federation (FN) banned him from the start due to rules. Reason. Bredo-Werndl applied to the FEI for six months’ maternity leave, which she will now have to take, although the 36-year-old is fit again after giving birth without complications. She finds the FEI rule “simply unfair” and incomprehensible, an opinion shared by many friends, including men.

In fact, it was a well-intentioned thought. female riders who have children should be given the opportunity to return to where they were before pregnancy after a break. It’s about world ranking points. They are collected at international launches and expire after one year. The rating table is recalculated every month, old points are removed from the rating and replaced with current ones. To take maternity leave, a rider must apply to the FEI and state when she would like to take a break, a minimum of six months and a maximum of one year. During this time, your points are not completely depleted, only 50 percent. The other half remains. The rider has a starting ban during this time, he can no longer decide otherwise if he feels fit earlier. Exactly the same rule applies in the case of prolonged illness. Although Jessica von Bredu-Werndl would have given up ranking points, she was still not allowed to start. He is considered “anonymous”, as the FEI’s letter to him and the German FN informs him. As there was no prospect of another decision by the FEI tribunal in time for the Ludwigsburg tournament, Bredo-Werndl decided not to take legal action for now.

Show jumper Jean Friederike Mayer-Zimmerman already had similar problems in the spring. She gave birth to her son, Friedrich, in January and competed in a tournament in Oliva, Spain, 14 days before her six-month due date. He had not received permission to fly from FN for the above reasons. “We told her that her name cannot be mentioned while she is on maternity leave,” FN sporting director Dennis Payler said. Meyer-Zimmermann rode anyway and not only paid for it by losing her world ranking points for the entire semester, but was subsequently disqualified from the Oliva tests. “Many rules to break,” as the FEI database somewhat vaguely puts it.

For Meyer-Zimmermann, a professional cyclist who competes and trades near Hamburg, it was tantamount to a professional ban. He has dropped from 107th in the world rankings to 270th, which means he has hardly started in major tournaments. He was able to return to the first row only with the help of national coach Otto Becker, who gave him a chance in the starting line-up. For example, Mayer-Zimmermann has twice made it to the double clear stage in Nations Cups, and next week he will be part of the German team in the Nations Cup finals in Barcelona.

Bredow-Werndl participates with other partners in the Equal Equest initiative for equal opportunities in equestrian sports.

Meyer-Zimmerman co-founded Equal Equest, an initiative for equal opportunity in equestrian sports, with other riders. In addition to Jessica von Bredow-Werndl, it also includes Meredith Michaels-Birbaum, who was first subjected to this rule in 2009 when she was expecting her daughter, Brianna. Meyer-Zimmermann’s claim. “Each woman should be able to decide independently and flexibly how much time she needs after childbirth.” Cyclists are supported by the German Federation, which submitted a change proposal to the World Federation. It provides that pregnancy and sickness absence will no longer be treated in the same way. The rider does not have to decide in advance when and how long he will take his child’s break. It should be possible for her to make a different decision during the child break depending on her personal well-being. Your points should be kept at 100% when he is not starting. National launches should be possible at any time.

As before, 50 percent of points must be allocated for breaks of four to twelve months caused by injury or illness. “Less than four months makes no sense,” said FN Secretary General Soenke Lauterbach. Otherwise, he fears that the rule will be abused because of the supposed disease, if only the horses are not in good condition. The proposal will only be discussed at the FEI General Assembly in 2023 and will come into force in 2024 at the latest. If the FN finds enough allies.