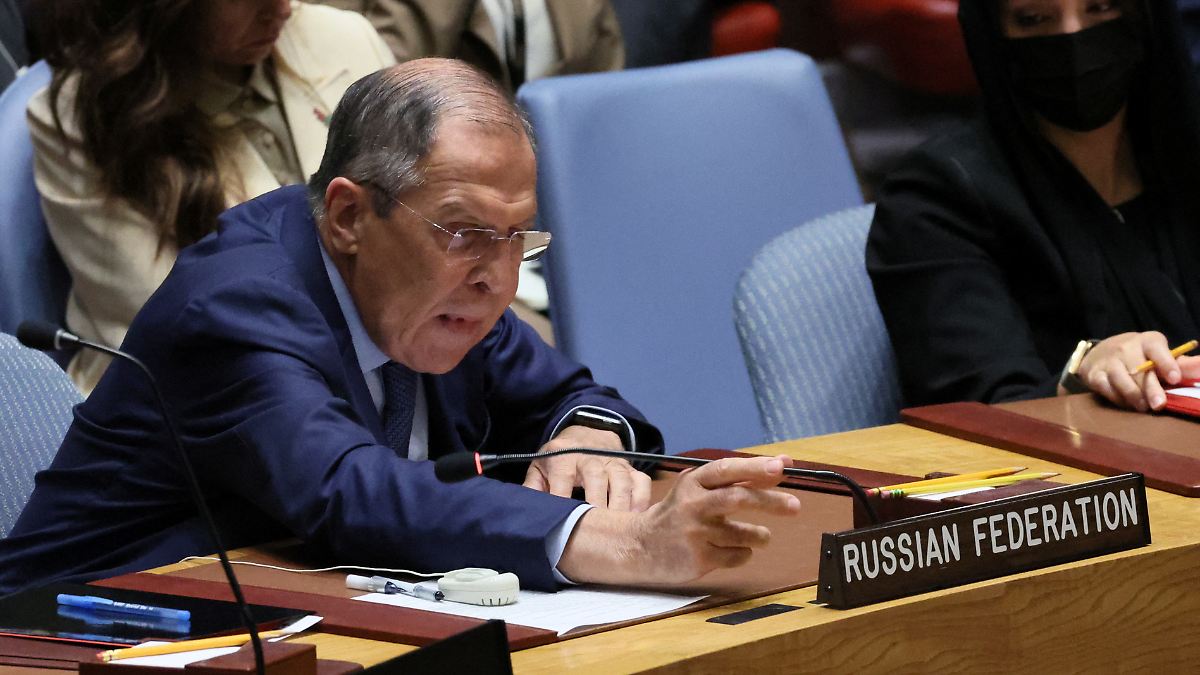 Russia’s foreign minister fooled the UN Security Council with a tough look. Lavrov arrives late and leaves the hall early. His Ukrainian counterpart, Kuleba, reacted with contempt and derision. The board of directors in New York is experiencing rock bottom.

In the UN Security Council, it is particularly noticeable who does not sit at the round table of the world’s most powerful foreign ministers. UN Secretary-General António Guterres and top diplomats from the US, Germany, France, Great Britain and China gathered in front of the huge “Peace Mural”. Ukrainian Dmytro Kuleba is also there – it is about Russia’s war of aggression against his country. But one is missing: Russian Foreign Minister Sergei Lavrov.

It’s 11:29 a.m. local time when the Russian walks through the hall’s wooden doors and takes his seat in his blue chair—for the first time since the war began—almost 90 minutes late. Lavrov spoke three minutes later. Those present listen with serious expressions as the 72-year-old defends the conflict – and lets it escalate further. “This policy of weakening and weakening Russia means that the West directly intervenes in the conflict and makes it a party to the conflict,” Lavrov complained about arms supplies and support to Ukraine. The West is covering up the crimes of Ukrainian President Volodymyr Zelensky’s government in the sense that “Zelensky may be a bastard, but he is our bastard,” he says angrily.

Just a day earlier, Lavrov’s boss once again dominated world news. President Vladimir Putin announced the partial mobilization of the armed forces to his people. Chancellor Olaf Scholz called it an “act of desperation” in view of the Russian army’s loss of territory in Ukraine. And the thinly veiled nuclear threat from Putin made it clear that real dialogue could not wait.

But Lavrov made it all too clear to the UN this rainy morning in New York that Russia is not ready for that at the moment. When he finally turned off the microphone, he looked at his watch, got up, and left the room at 11:52 a.m.—without hearing a statement from another country. Lavrov is in the UN Security Council for 23 minutes – the body is experiencing one of its low points that day.

“He left the House. It doesn’t surprise me,” criticized British Foreign Secretary James Cleverly. Lavrov did not want to hear the collective condemnation of the Security Council. US Secretary of State Antony Blinken said the latest escalations during the general debate at the UN General Assembly showed “utter contempt” for the UN and diplomacy. “The international order we have gathered here to uphold is crumbling before our eyes. We cannot and will not let President Putin get away with it.” At the same time, he emphasizes that Kyiv remains no alternative to the fight: “If Russia stops fighting, the war will end. If Ukraine stops fighting, Ukraine will end.”

“Stop sending your own citizens to die”

German Foreign Minister Annalena Baerbock calls on Russia to end the fighting. “This is a war you won’t win,” says the Green politician, without naming Putin. At the same time, he calls: “Stop sending even more of your own citizens to their deaths.”

The night before, Zelensky received a long round of applause for his video speech at the 193-member UN General Assembly. Most of those present stood up, the Russians remained seated. Zelenskyy again, in his drab olive military shirt, exuded the confidence of a wartime president with soldiers advancing on the battlefield. His face may have been lined with exhaustion, but the showdown with Putin was forceful: “Russia will be forced to end this war.” And the neighboring country must be punished for its crimes, he demanded.

The 44-year-old Ukrainian never once mentioned Putin by name. But Selensky left no doubt who he meant. There is only one “who, if he could interrupt my speech, would now say he was satisfied with this war.” Looking at Russia, he added: “But we will not let this entity define us, even though it is the biggest country in the world.” But Zelenskyi also had a message for those war-weary countries whose support is somewhat crumbling: there is no such thing as neutrality in this war, at most indifference. There must be justice, Zelenskyy demanded. “A crime was committed in Ukraine and we demand punishment.” Probably referring to the world-famous novel by Fyodor Dostoyevsky, he said: Russia is well aware of the principle of “guilt and punishment”.

When Kuleba speaks, Lavrov is gone

Then, when Zelensky’s Foreign Minister Kuleba speaks in the Security Council, Lavrov has long since left. Kuleba sees the partial mobilization of the Russian military in the face of recent military setbacks as an admission of defeat for Moscow. Addressing Russia, he says: “You can take 300,000 or 500,000 people, but you will never win this war.”

Kuleba also emphasized his country’s will to end the conflict. “We just want to lead a normal life. But it is not enough that Ukraine wants peace. Russia must give diplomacy a chance. But that seems impossible that day: “I also noticed today that Russian diplomats are fleeing just like Russian soldiers.”