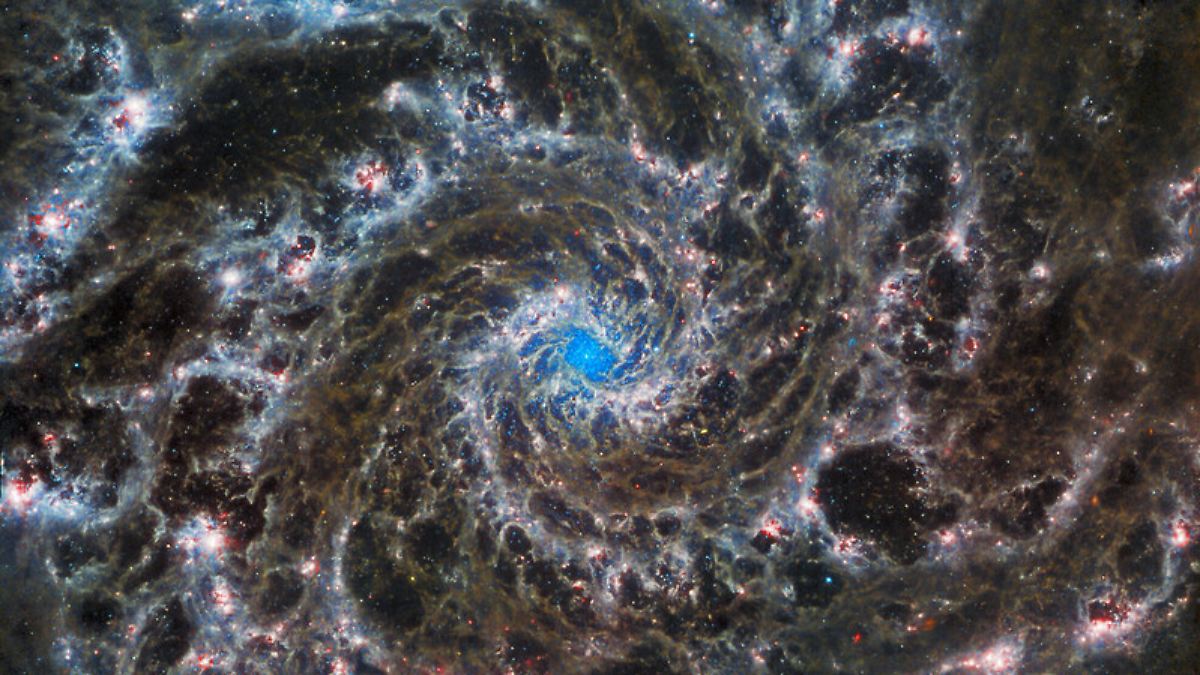 The “James Webb” space telescope is constantly sending new, spectacular images to Earth. It makes visible things that are normally hidden from the human eye. What is behind this technology? And how “real” are the color shots?

Shining stars, glowing planets, colorful nebulae: the universe is often depicted in pictures as a mystical place with many colors. How are these fascinating space images that the “James Webb” telescope has been sending us lately?

The “James Webb Space Telescope”, as it is called in its full name, has several instruments on board for this purpose. These record various electromagnetic frequency ranges in the near-infrared range, which are mostly invisible to the human eye. This data “is stored in a digital format using ones and zeros,” says Joe DePasquale on a NASA podcast. It’s basically a black and white picture.

Senior Data Image Developer at the Space Telescope Science Institute in Baltimore, Maryland, and his team are responsible for, among other things, the publication of space images from the “Webb” telescope. This data from the telescope must first be cleaned of instrumental effects, explains astrophysicist Kai Noeske from the European Space Agency (ESA). Then comes color: Roughly speaking, different areas are assigned the primary colors red, green, and blue.

Because it’s not like scientists created an image with the colors they chose. DePasquale explains, “We respect data from start to finish. Objects in space, such as stars or gases, are visible at different wavelengths. In order to record them, the Webb telescope has several filters on board. Astrophysicist Noeske illustrates the work in an image processing program where color enters the image: “The image in the shortest wavelength filter is usually the blue channel, in the middle filter the green channel, and the image in the longest wavelength filter is the red channel.”

This approach is not very different from regular digital or smart cameras in this respect. They also use tricks to depict colors. There, the sensors measure the proportions of red, green and blue in the respective areas of the image. Monochromatic image information is compiled into a color image directly in the camera or smartphone. In the case of images from the “Webb” telescope, this step is performed later. In addition, published recordings are sometimes composed of hundreds of individual images.

Image processing exists in many fields, including microscopy. And yet: when images from space are released, conspiracy theorists often feel called to the scene. For example, they believe that the moon landing was staged about 50 years ago or that aliens left a human face on the surface of Mars. Recently, they have also been focusing on Webb Telescope images. Your claim: The images are fakes. Why is there no faith here either?

“We often talk about conspiracy ideology when people develop a worldview in which the suspicion of an alleged conspiracy is behind everything,” explains political scientist Josef Holnburger. He is one of the CEOs of CEMAS (Center for Monitoring, Analysis and Strategy) in Berlin, which, among other things, monitors radicalization tendencies and the spread of conspiracy stories on social networks.

These conspiracy ideologies often lead to anti-everything positions such as the belief that climate change does not exist, that the Earth is actually flat, and that humans have never been to the moon. “All new findings are subordinate to this worldview: the ‘James Webb’ telescope images must therefore be false in this worldview. Precisely because they come from scientists,” explains Holnburger. In the worldview of conspiracy ideology, research works with alleged conspirators.

The Massachusetts Institute of Technology (MIT) devoted a recently published study to Webb’s data. The results suggest that the tools currently used to decode the light signals may not be sufficient to accurately interpret the Webb data. “The model (…) currently does not match the accuracy and quality of the data available to us from the James Webb Telescope,” the researcher said in a statement. Current ratings could be more accurate.

Look for another Earth

The James Webb Telescope was launched on December 25, 2021 aboard an Ariane launch vehicle. There used to be cost explosions and repeated shifts. The space agencies of the USA, Canada and Europe are collaborating on the project. It is behind 30 years of development and a cost of around ten billion dollars. The Webb telescope follows the Hubble telescope, which has been in use for more than 30 years. While “Hubble” works in the optical and ultraviolet range, “James Webb” investigates in the near-infrared range.

The “James Webb” telescope provides new images of the early universe using, among other things, a 25 square meter mirror. Science hopes the records will provide insight into the time after the Big Bang about 13.8 billion years ago – and possibly evidence of a second Earth.