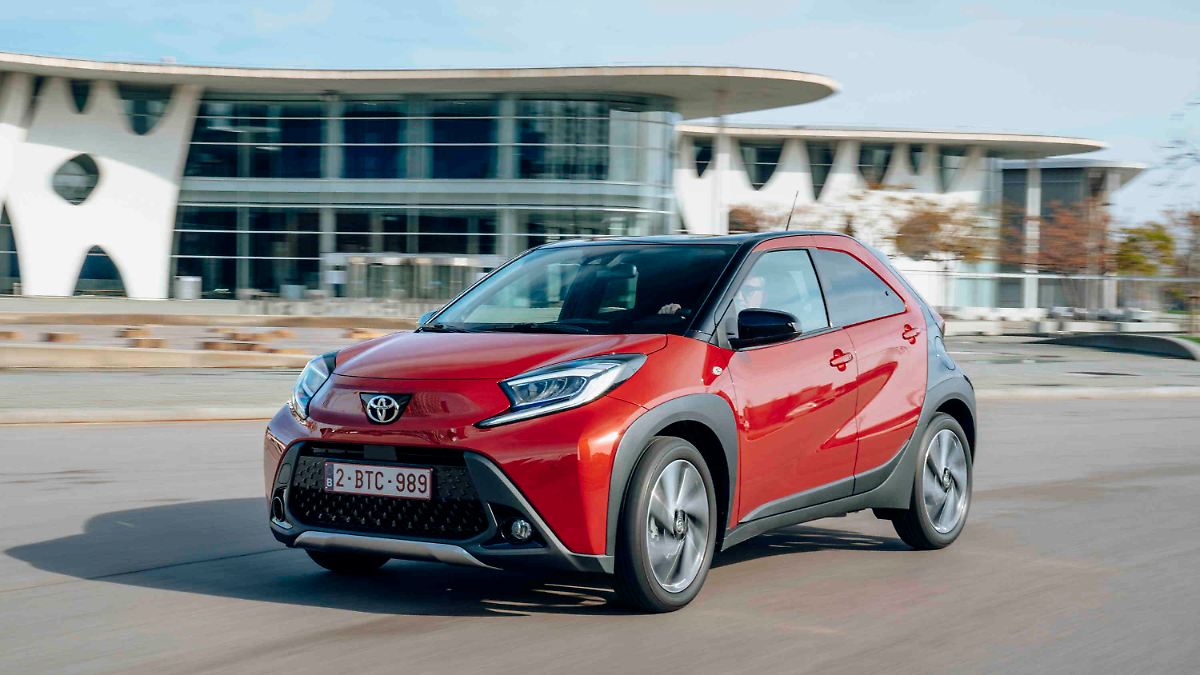 With the Aygo X, Toyota remains true to the small car segment. The mini-SUV offers much more in appearance and equipment than is usual in its class. However, he cannot completely hide his “low origin”.

The Aygo, which was discontinued at the beginning of 2022, was very popular as a simple company car among others with fleet operators. To get private users more interested in the smallest segment again, Toyota has now upgraded its entry-level model to a mini-SUV like the Aygo X. With this comes a good dose of lifestyle, character and comfort, which significantly adds to the otherwise modest everyday life of a small car more vigor.

Those who know the Aygo X from pictures and subsequently experience it for themselves will be surprised by its still compact dimensions. Although it has grown by more than 20 centimeters, with its 3.70 meters it is still one of the successful gap-fillers in urban areas where there is often a shortage of public parking spaces. With its large-format wheels, increased ground clearance and two-tone paintwork, it can also stand out a bit from the crowd. The comparison with the regular Ayge, which optically degrades the X to a gray mouse, is impressive.

The rear door is included in the delivery

There is always a rear door in the standard X, which makes everyday life easier compared to a three-door car, especially with children. Although the interior is not very spacious, it is still sufficiently dimensioned to serve four people. In any case, there is room for development for drivers of average height.

The driver’s seat is remarkably good, as there was no pinching of the back, which is common with small car seats, even after long journeys on the highway. The view into the luggage compartment is rather sobering. 231 liters – this is enough for a week’s shopping, but not for holiday trips with friends and relatives. If the rear seat backrest is folded forward, it is possible to transport even bulky items, as 829 liters can now fit in the back.

The Aygo X can again differentiate itself from the small car level with an optional up to 9-inch touchscreen infotainment system. However, the processor responsible for multimedia functions could do a little more work. The networking options are state-of-the-art. There is a navigation system with real-time traffic information, and smartphones with Android Auto or Apple Carplay can also be integrated. The advantage of a small car: As a driver, you don’t have to stretch your right arm too far to reach the touch screen.

Stunned look at the steering wheel

The view of the steering wheel is stunning: there are also buttons for the remote cruise control – so far this is a complete exception in the class of automotive midgets. On the other hand, the number of plastic parts with a rather fragile appearance is typical for this class. Their semi-simple screw connection has a cost-optimized effect, with the screw heads at least covered by small caps. The door panel on the inside remains partially exposed, with which the driver often comes into contact when he wants to rest his left arm on the non-existent door arm. Instead of a thick plastic panel, the arm meets body-colored metal.

The small three-cylinder is started with a button. The engine sounds crisp, but its power is not very explosive. One liter displacement, no turbocharging – that’s enough for just 53 kW/72 hp. In any case, if you keep the little engine revving, you can easily swim with traffic. But on the highway, you move significantly down the food chain.

However, with the weak Ayge X, you don’t have to avoid fast cars. Of course, 130 km/h is no problem with a sufficiently long approach. If homesickness and a tailwind come into play, the speed display can occasionally drift above 170. However, the piston triple struggles to maintain the required uphill speed. In our case, switching is still done manually. Shift damping as a warning: The five-speed transmission requires frequent shifting. Alternatively, Toyota offers an automatic for an additional fee of 1,100 euros.

In reality, the Aygo X should be satisfied with around 5 liters of petrol per 100 kilometers, but in practice it was 6.5 liters for us, which was mainly due to some longer motorway journeys. At the recommended revs, the engine already works in a higher rev range, which actually makes the thrifty three-cylinder a little thirsty.

The undercarriage comfort of the little one is pleasantly pleasant. Thanks to the longer suspension travel, some unevenness is evened out. Still, the Aygo X doesn’t stumble through corners with a drunken list if it could be sportier around the corner. If necessary, the brakes, which look a little puny on the 18-inch alloy wheels, hold decently. Sometimes they even become active on their own if the collision avoidance system decides it needs to avert what it thinks is an imminent collision.

Big plus: a large number of assistants

Many assistants are a big plus for the Aygo X, which is why EuroNCAP awarded it the most points, especially in this evaluation section. Nevertheless, due to the absence of a central airbag, it was only enough for four stars, which is a good result.

If you forget about the central airbag, the Aygo X already offers a pleasant extensive safety and comfort equipment in the basic model, which costs less than 16,000 euros. With the all-round happy package offered by the top-end Explore equipment, the Japanese cost just over 21,000 euros. If the automatic system is still on board, more than €22,000 will be due. That may be a lot of money for a small car, but in the case of the Ayga X, there are also many details from higher classes on board.