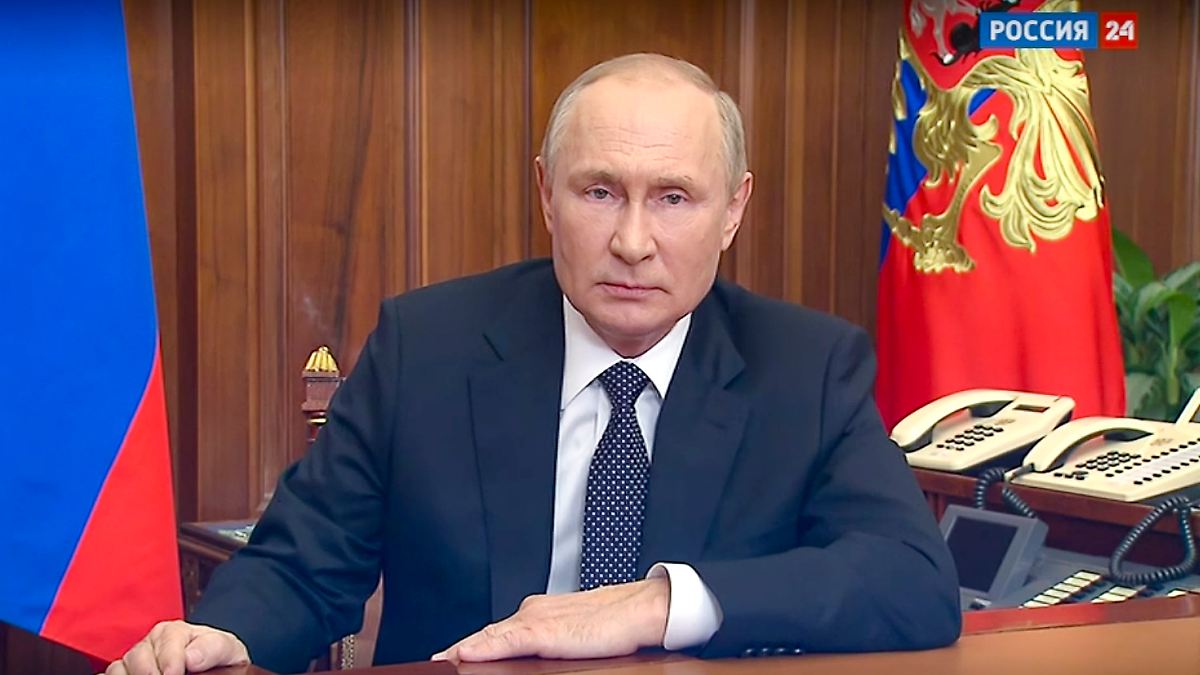 As long as Putin is in power, he will not leave Ukraine alone. Therefore, the only option for Ukraine is to push him back. For this, he needs additional support from the West.

When Vladimir Putin delivered his hour-long speech in Ukraine on February 21, in which he denied the neighboring country’s right to exist, Ukrainians became increasingly nervous. After weeks and months of advance warning of a major Russian invasion by British and American intelligence services that many in Ukraine received with skepticism, the crude worldview presented at such length by the Russian president sounded like a declaration of war. Three days later it was clear that she was exactly like that.

Exactly seven months later, on September 21, Putin announced the so-called partial mobilization. Now it was primarily Russia that relived the shock of February 24. For many Russians, the war of aggression against Ukraine, which they watched from the comfort of their sofas, was much closer than before.

Of course, mobilization in Russia was also important news for Ukrainians. It was and is being talked about and discussed. But what was completely missing now: the fear of Putin, his fake referendums in the occupied Ukrainian territories and, above all, his nuclear blackmail.

People in Ukraine were not impressed by Putin’s words and actions for long, even though they are directly affected by this war and after the tragedies of Bucha and Mariupol, they were recently confronted with the terrible images of mass graves in liberated Izyum. Moreover, after the successful Ukrainian counter-offensive in the Kharkiv region, Putin openly resorted to terror tactics against Ukrainian civilian infrastructure. Nor do they hide the fact that the September 11 attacks on thermal power plants in the southeast of the country were intentional.

Putin obviously wants to exhaust the Ukrainians. He wants them to take to the streets at some point and demand a truce from their government. And after the defeat in Kharkiv, he would like to secure at least the Ukrainian territory, which Russia is still occupying at the moment. His problem: not only President Volodymyr Zelenskyi, but the entire Ukrainian nation does not care. In this existential defensive war, Ukrainians have no choice but to fight for the occupied territories. As long as Putin is in power, he will not leave Ukraine alone – and he certainly will not stop at the current front line, but at most he will pause and then strike again.

The only option for Ukraine and also for the West is to push him back. This requires even more military support from the West. For although we have already seen most of the combat-ready Russian army at the front, mobilization will at least in time and partially solve the Russian personnel problem that was partially responsible for the Russian disaster in the Kharkov district. The answer to Putin’s escalation can only be new deliveries of heavy weapons to Kiev – including Western-style battle tanks.

The risks of escalation so often invoked in the West are borne only by Ukraine, and Ukrainians have been aware of them since the beginning of the war. For example, could Putin use tactical nuclear weapons against a larger concentration of Ukrainian forces? This is not completely excluded, and the latest program text of the Ukrainian Commander-in-Chief Valery Zalushny also mentions this possibility. But this shows that the Ukrainians are prepared for all scenarios, both mentally and militarily. In any case, such an attack would pose a risk to the Russian soldiers themselves and is therefore only moderately likely.

Shortly before the Ukrainian counter-offensive, high-ranking Russian government officials and politicians visited cities such as Kupyansk and Izjum in Kharkiv Oblast. “Russia is here forever,” they declared. The statement has not aged well. After the liberation of the northern districts, after the expulsion of the Russians from the strategically important Snake Island, after the counter-offensive and now after the replacement of the commanders of the Azov regiment, who have always been demonized by Russian propaganda, one thing is clear: whatever Russia says, it only understands the language of force. Ukraine will no longer rely on any other language, nor should it rely on the West.