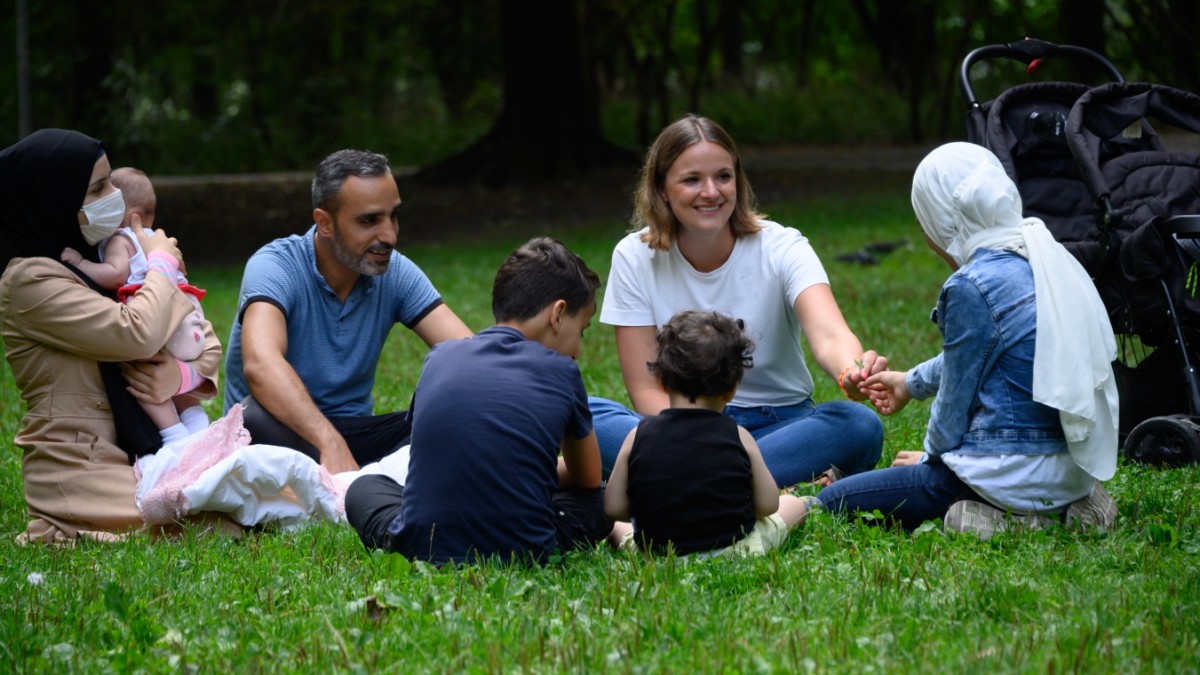 Safa listens attentively, although most of the time she doesn’t understand what they say. He sits patiently with his hands in his lap. If you meet his gaze, his eyes narrow and his mouth widens in a warm smile. And when he talks in Arabic about things that are close to his heart, he never stops. He tells about his grandmother who died in Syria a few days ago. About the park in his hometown of Aleppo, where he used to meet his friends. There is also a garden near the shelter on Blumenstrasse that looks confusingly similar. But he talks about Marla the longest.

This April, a month and a half after Safa’s family arrived in Germany, Marla Luers sponsored her, her husband, Mohammad, and their four children. He is a member of the Munich Refugee Council’s “Save me. the city says yes” is part of the program dedicated to the humanitarian reception of refugees. In addition to deploying volunteers to support them in their daily lives, the project accompanies refugees with interpreters on visits to the authorities, helps them find accommodation and organizes language courses.

Many people who support Save Me, including Safa’s family, who did not want their last name published, came to Germany through the UN resettlement program. The program includes refugees who are particularly vulnerable and who, in the view of the authorities, have no prospect of integration in their first host country, who need medical assistance or are considered particularly vulnerable for other reasons. a safe third country ready to invade.

Safa’s family had to flee from Syria to Turkey in 2016 due to the war in their homeland. Mohammad Kord, volunteer coordinator of the “Save Me” project, translates his fragmented memories. The conditions in Aleppo were unbearable, everything around had collapsed. But the family did not have it easy in Turkey either, they felt that they did not belong to them. There was almost no work there, at least not for refugees like him. His life in Germany is now different. They have met very friendly, open-minded people since their arrival. People like Marla Lewers. People like Muhammad Kord.

“We met when Safa was still pregnant,” Marla Luers explains slowly, making a big ball with her hands in front of her stomach. When he wants someone to understand something, Luer’s gaze is so accessible and his movements so lively that you can’t help but watch him. He looks at Safa expectantly. But he doesn’t understand. Then the husband says one word: Hamil. Pregnant Suddenly she’s beaming, nodding wildly with her arms as if cradling a baby. Her youngest child, Valaa, was born in Munich three months ago, and her two older children have been going to school for several months.

The family wants to stay in Munich and is now fighting for a residence permit. Mohammad attends a German language course so that he can work. Since Safa cannot do this at the moment because of her daughter, she asked Luers to study German with her. “Now we always sit together at the dining table and point to the subjects we call German and Arabic,” says the 32-year-old woman, who has just started learning the language and writing of her foster family. At the moment, most of the communication is still through Google translator, with 13-year-old Fatima and 11-year-old Mohamad sometimes translating for him.

“When the war started in Ukraine, we had almost no volunteers.”

Luers visits Safa once a week after work, helps the children with their homework, plays and does handicrafts with them. On weekends, they like to party at Isar, a family favorite, or go to the zoo together. The Munich resident thinks it’s “incredibly fun to get to know a new culture and new food.” A love of food is definitely something he and his family have in common. Luers had no experience in refugee aid before her sponsorship, working in the marketing department of a communications agency. A few years ago, he supported the Munich Refugee Council with leaflets, and at the beginning of this year he wanted to become active himself.

“When I told my acquaintances that I wanted to sponsor a child, they immediately thought of a Ukrainian family,” he says. Of course, the war in Ukraine was one of the triggers for his desire to do something for refugees. However, his origin never played a role for him. “I knew I wanted to help, I don’t care who.”

Volunteer coordinator Mohamad Kord is sure that not everyone sees things the way Luers does. “When the war started in Ukraine, there were almost no volunteers left,” he says. Many have focused on people in Ukraine and offer their help, but only to a specific group of refugees. “The fact that other wars also force people to flee is often forgotten,” criticizes the 32-year-old, who fled to Germany from his homeland, Damascus, in 2016. When he arrived at the central station of Munich, he did not read a single word in Arabic, today everything has been translated into Ukrainian. “It’s all very well and positive if the focus wasn’t on just one country.”

Lüers is clearly focused. Safai, his words, his gestures. Safa wanted to say something else, something related to Marla. Her name keeps coming up, but Marlas Lure’s knowledge of Arabic is still not enough to understand Safa. Curiosity is visible in his eyes, his gaze wanders again and again to Mohamad Kord, who after a few minutes is silent again, and takes a moment to process what has been said in his head. “Marla, what did you do?” he asks with a smile before translating.

It is about Safa’s son who was born with a defect. Most children recoil at the sight of them, so he often hides them in his pocket or behind his back. But when Luers is there, he doesn’t. Because he lets her know without saying a word that he doesn’t have a problem with his hand. Safa wants to thank you for your sympathy. Shukra. “Shukra, I can do it too.” calls Marla Luers, and when her eyes meet Safa’s, her mouth widens in a hearty laugh.