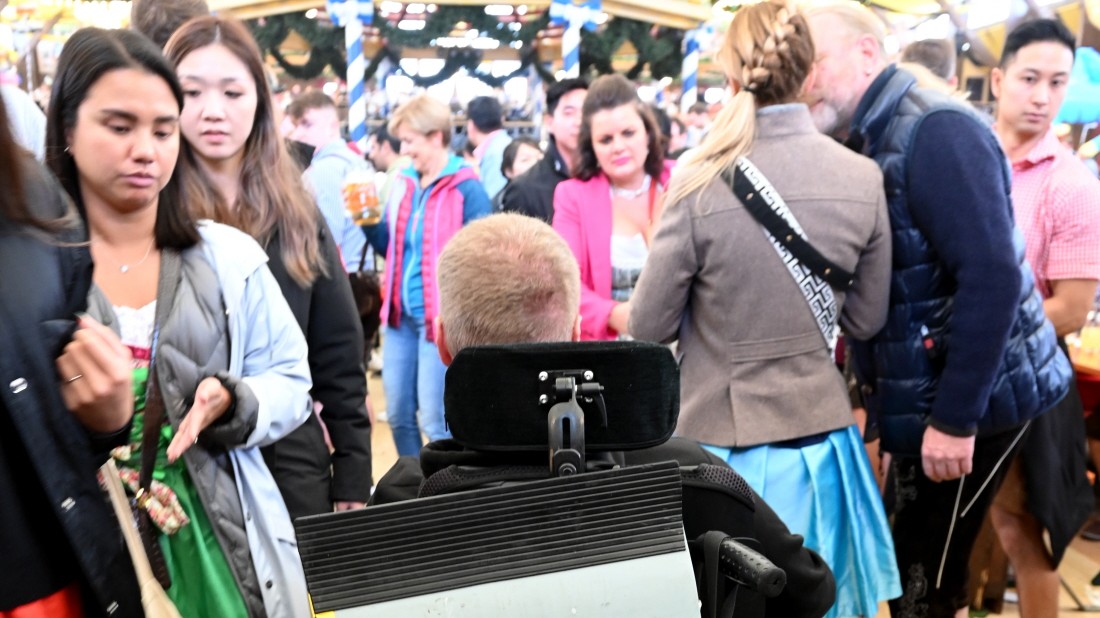 Smiling faces, people hugging each other, and someone who wobbles more than he stands. The atmosphere in the Paulaner tent at Oktoberfest is currently good. This also applies to those who could not get hold of one of the popular seats. They stand in the aisles and look ahead as the band sings “Cheers to coziness” again. Cell phones are taken out filming or taking pictures of the scene. If you want to pass through the crowded aisles of the beer tent, just click through. But it’s not so easy for Markus Deeminger. He waits in his wheelchair at the back of the crowd until others notice him and make way.

Dieminger’s right hand rests on the joystick of the electric wheelchair. He moves forward, then suddenly stops. “Now what should not have happened,” he says. Someone pushed past and bumped into their now disabled hand on the joystick. It’s only when Deeminger helps someone get their arm right that it goes on for him. At the end, the waiter helps him to move better in his wheelchair through the crowded corridor. The employee shouts again and again. “Careful, careful.” and “Careful”, until the people make an alley for the stroller.

The 23-year-old student is not at Oktoberfest for the first time this year. As a true child of Munich, he must have been there eight times, says Markus Dieminger. He is happy that after a two-year hiatus from the epidemic, it is possible to go to Oktoberfest again, or in his case, to drive. Dieminger has SMA, spinal muscular atrophy type 3, a rare disease of certain nerve cells in the spinal cord. That is why he has been in a wheelchair since he was five years old. A personal assistant supports him in his daily life, as his mobility is severely limited.

When Dieminger steps out, the first thing to do is take a deep breath. “You can’t pass, and it’s narrow,” is his conclusion after a short turn around. Next time, he should come earlier or make a reservation in advance, he says. The official Oktoberfest website states that all large sidewalks have at least 20 handicap accessible spaces inside and 20 in the beer garden. In addition, each of the large and very small festival halls has disabled toilets. Even away from the tents, Wiesn advertises “uninhibited folk festival fun.” Many booths have ramps for wheelchair users and some rides that can be used by people with disabilities, such as the large ferry.

As Markus Dieminger drives towards the gondolas, the rain continues to fall on the Theresienwiese. The weather has both advantages and disadvantages for the student of that day. The advantages because less happens and therefore he can handle the terrain better. However, the wet is a disadvantage when Deeminger is forced to drive over a metal ramp. His wheelchair tires could slide more easily as a result, he says. A wooden ramp would be better.

The lowered asphalt entrance, which Dieminger discovered at the Waffle Bakery, is also a good solution for wheelchair users, he explains. “Because it’s rough and you don’t slide.” However, the student does not want to describe the stand as completely barrier-free. As with other Oktoberfest booths, the counter is extremely high. The waitresses will only listen to the customer badly if they are standing above and you are sitting below. “But basically you have a problem everywhere,” says Dieminger, “even in a bakery or a butcher.” As a rule, there are enough employees who offer their help, says the student.

Grades 2 to 3 depending on tent or trip

After a few meters, Dieminger reaches the white and blue raft. On the left, he already noticed the disabled access to the gondolas, but you have to pay for the ride first. However, since the entrance to the cash registers is not at ground level, but slightly elevated, Deeminger has no way of getting there himself. “It’s a very stupid solution and we haven’t thought it through,” says the 23-year-old. When asked about the shop assistant, they said that most wheelchair users have an accompanying person who can help with payment.

The situation seems better with the handicap entrance on the left side of the cash registers. Dieminger uses a ramp to access both gondolas, which are also wheelchair accessible. Here, if necessary, Ferris wheel employees also help to get on and off.

Although Deeminger doesn’t always find certain areas of Visney wheelchair accessible, she generally feels positive about her visit. He’ll give Oktoberfest access a 2 to 3 rating, the student says, “depending on which tent or ride you’re in.” For example, he notices that there are more disabled toilets on the site than before. And even away from Oktoberfest, he feels that more and more people are paying attention to the issue of accessibility;

Markus Dieminger comes up with various concrete suggestions for improving Oktoberfest: For example, more stands could lower sales counters and install ramps. Also, handicap accessibility photos will be useful on the Internet, Dieminger says. This allows wheelchair users to assess whether the ride is actually usable for them before they visit. Even less will stand in the way of “unimpeded fun at the folk festival”.