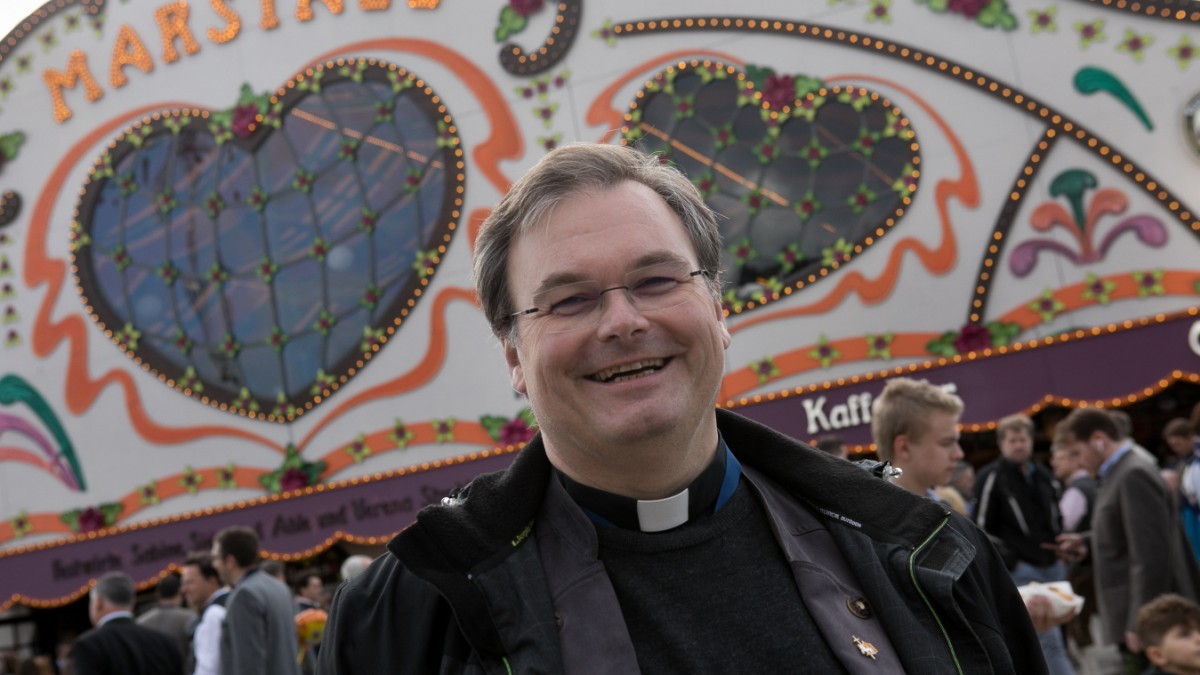 Oktoberfest pastor. It sounds unusual, but it has been around for years. In fact, since 2014, two priests have been taking care of the showmen at the Munich Wiesn. But after the death of the Dominican Father Paul Schäfersküper, who was the pastor of the Showmen of Upper Bavaria and Swabia for 18 years until his death at the end of December and was therefore also responsible for the Oktoberfest, Sascha Ellinghaus is now the only person responsible for the world’s largest folk festival as national pastor. Until Schaferskueper’s successor is appointed, he will hold the post “here” as one of Germany’s four showman pastors, as he puts it.

As a child, he enjoyed attending circuses and fairs and collected old circus posters as soon as the showmen left town, the 50-year-old man said in an interview. During his studies in Paderborn, he lost sight of industry, did not associate it with the priesthood, and believed that his place was “in a beautiful baroque parish church, very classical.”

Because. For Ellinghouse, the path to the priesthood was not always clear. He took a year off between his initial theology degree and the last four semesters of his studies and gave God an ultimatum during this time. . The divine sign is missing. If things had turned out differently, he might have found favor in graphic design or organizational work. As a showman pastor, he can incorporate both into his work today; he designs his own church service posters and operates his own logistics center in the form of a minibus that takes him from his headquarters near Bonn through the Federal Republic and is highly scheduled. calendar year.

Because life as a showman pastor is exhausting. Sasha Ellinghouse spends about a third of her time on the road and in hotels trying to accommodate as many requests as possible. “When you love people, sometimes you make commitments that don’t always make chronological and logistical sense. The calendar says no, but you say yes,” he says. The danger of the work of a pastor whose congregation is scattered throughout the country.

“On the folk holiday, as in every community, there is light and shadow.”

Ellinghouse sympathizes better with showmen because, like them, he leads a wandering life most of the time. This means, on the one hand, working where others mark, and on the other hand, maintaining social relations at a distance in time and space. Ellinghouse is also no stranger to constant goodbyes, today and even in childhood and adolescence it was not so.

He grew up in Braunschweig, Dortmund, Hamburg, Frankfurt and Herdecke in the Ruhr region. “No, my parents were not showmen,” he jokes. With his father’s promotion at the department store chain, where associates were not promoted to supervisor in the same house at the time, the move is inevitable. For teenage Sasha, this means school, friends, maybe even a change of state. four years. “The difference is. moving then always meant breaking up with friends and finding new ones, today I travel with the same people I meet elsewhere.”

The wistful expression on Ellinghouse’s otherwise cheerful face suggests that the constant reboot after the move was “sometimes easier, sometimes harder.” She prefers to focus on beauty. This would also include the debauchery that is part of a workplace like Oktoberfest extreme advertising is guided and religion is compatible with him. “On the folk holiday, as in every community, there is light and shadow, grace and what the church calls sin. It’s always a question of where I want to look, you can also look.” There’s nothing wrong with alcohol, he thinks you can enjoy beer and shows the front half of the biker.

Despite all the traveling and hotel stays, she doesn’t feel lonely, Ellinghouse says. “It doesn’t matter which fair I go to. there will be no place where I don’t know someone. I am always at home. in my community.” There are enough shelters for him at a festival site like this, he can move like a family member, through the back door next door for a coffee or the next cubicle for a chat. “I have a feeling that I have a closer connection with the people of the circus and the folk festival than before in my ward.”

Ellinghouse considers most showmen very traditional. They appreciate that he brings to them a church with a sacred opening space, whether it is for a baptism, communion, wedding or riding dedication. This branch of pastoral care has existed since 1956, when Pope Pius XII. with an official document authorized the first clergyman of the showmen to conduct services outside the holy church area. A “properly made” portable altar was made a condition, and Ellinghouse still adheres to it.

It doesn’t matter whether it’s a portable organ, a lace ceiling or embroidered damask, it’s about “worthy design, because for showmen it means regular worship.” Weighing around 400 kilograms, transporting, installing and maintaining this equipment is not only physically demanding, but also requires a lot of preparation time. Health permitting, Sasha Ellinghouse would like to remain a national chaplain until retirement age.

There will probably still be support for the southern Bavarian region until then. But it depends on the respective partner. “I think showmen need something solid, not too eccentric.” So a pastor you can touch like Sasha Ellinghouse.