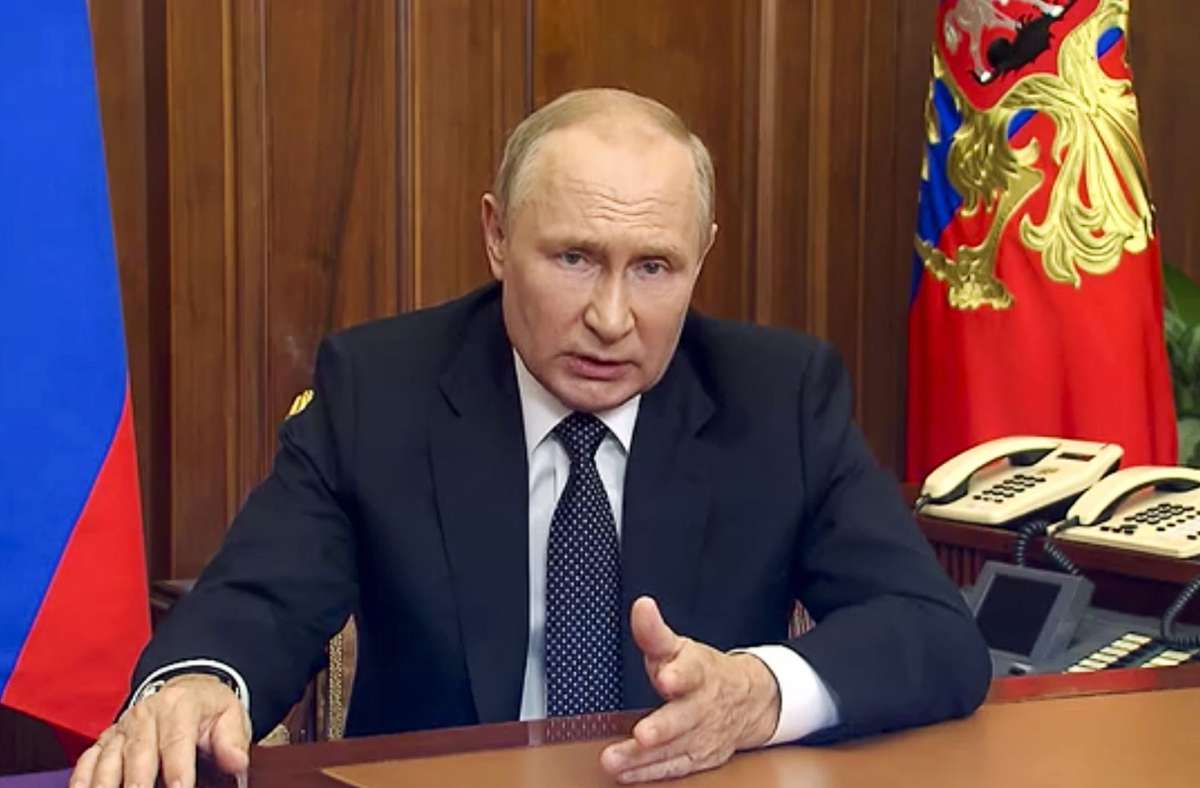 In view of the heavy defeats in the war against Ukraine, Russia is counting on a new escalation. The head of the Kremlin, Putin, announces a partial mobilization of the armed forces. What exactly does this mean – and what do the planned annexations of occupied territories have to do with it?

Russia wants to send a total of 300,000 reservists to Ukraine, about double those who have fought there so far. They should bring the turning point in the war which has lasted for seven months and which is anything but successful from the point of view of the Kremlin. Among other things, a large-scale planned annexation of Ukrainian areas must be applied. But is it realistic? The most important questions and answers:

What does partial mobilization actually mean?

The decree obliges the Russians to participate in the war, which until now – at least in theory – was voluntary. 300,000 reservists must be mobilized now. According to information from the Ministry of Defense on Wednesday, former conscripts and regular soldiers in the enlisted rank up to 35 years old and reserve officers in lower ranks up to 45 years old are affected. Above all, men with combat experience and special military training should be sent to war. There are a total of 25 million reservists in Russia, he added.

In the Federal Republic of Germany, there has never been such a partial mobilization for combat use. In the past, more reservists were only used for exercises.

How to apply partial mobilization?

Russian governors were directly responsible for organizing the enlistment of soldiers in their regions. To enforce the mobilization, Putin has also just tightened several laws. Desertion and “voluntary” entry into captivity are now severely punished.

Moreover, after Putin’s order of partial mobilization, Russian conscripts are no longer allowed to leave their place of residence according to law. The State Duma, on the other hand, said people could still travel undisturbed in Russia, but travel abroad was no longer recommended.

What is Putin’s goal with recruiting reservists?

There is still official talk in Moscow only of a “special military operation” in Ukraine – and so far it has probably not brought the hoped-for result for the Kremlin. After seven months of war, Russia has conquered larger areas in eastern and southern Ukraine, but recently suffered a severe defeat: under pressure from Ukrainian counter-offensives, Russian troops almost completely withdrawn from the northern region of Kharkiv. In other regions too, the Russian occupiers are threatened with losing control.

Moreover, according to independent observers, the losses are significantly higher than the figure of nearly 6,000 dead Russian soldiers now conceded by Defense Minister Sergei Shoigu. In this context, Putin probably hopes to be able to effect a turnaround on the battlefield with the reservists now mobilized. And he is also likely to speculate that his recent threats will intimidate Ukraine and its Western supporters.

What role do the planned annexations of Ukrainian territories play?

The occupiers of the eastern regions of Luhansk and Donetsk, as well as Cherson and Zaporizhia in the south, announced that they would vote this week in violation of international law on annexation to Russia. They are mock referendums because they are being held without Ukraine’s consent, under martial law and not according to democratic principles. With the four zones, Moscow is threatening to annex an area of ​​more than 108,000 square kilometers. This corresponds to the size of Bavaria and Baden-Württemberg combined.

Similarly, Russia annexed Crimea, Ukraine’s Black Sea peninsula, in 2014. As was the case then, international recognition is also not in sight this time around. Nevertheless, the Kremlin would classify future attacks on Luhansk, Donetsk, Cherson and Zaporizhia as attacks on its own territory. And Putin threatens: “If the territorial integrity of our country is threatened, we will certainly use all available means to protect Russia and our people. This includes nuclear weapons.

How realistic are Putin’s plans?

According to the forecasts of international military experts, Russia will probably take longer than expected and will only be able to field units of questionable combat effectiveness. “A partial mobilization will only really have an impact on the ground in a few months,” said Green Party politician Sara Nanni. US military expert Rob Lee said on Twitter that more soldiers on the Russian side were involved in the fight who didn’t want to be there. His conclusion: “The difference in morale and troop cohesion between the Ukrainian and Russian associations is growing.”

What do the developments mean for the Ukrainian counter-offensives?

In Kyiv, Moscow’s announcement was calmly noted. External adviser to the Ukrainian presidential office, Mykhailo Podoliak, asked on Twitter: “Is everything still going as planned or not?” President Volodymyr Zelenskyy had already stressed in advance that Ukraine would not be intimidated. Moreover, new forces are expected to arrive from the Ukrainian side in the coming months. For example, Ukrainian soldiers are trained in Britain and other Western countries.

How is the West?

High-ranking Western politicians see Putin’s announcement as a “sign of weakness” and an “act of desperation” over Russia’s recent military failures. Chancellor Olaf Scholz said Putin “completely underestimated” the situation from the start. However, it is unclear how Western countries will cope with the new escalation beyond words – especially with Putin threatening to use nuclear weapons if necessary. So far, far-reaching sanctions have been imposed on Russia and weapons and ammunition have been supplied to Ukraine. However, a direct military intervention from the West is ruled out.

How do the Russians react to the partial mobilization?

Since the start of the war, many Russians have feared such a move by the Kremlin. On Wednesday, independent organizations set up direct hotlines for men who receive a notice of appeal. Many flights to countries still accessible from Russia were fully booked. Demonstrations have been called in several cities, but they are not expected to be large. For one thing, the Kremlin has recently massively expanded its crackdown on critics. In addition, Russian state media have been telling citizens for months that the country is under attack from NATO and the “collective West” – and that defending against it is now a patriotic duty.