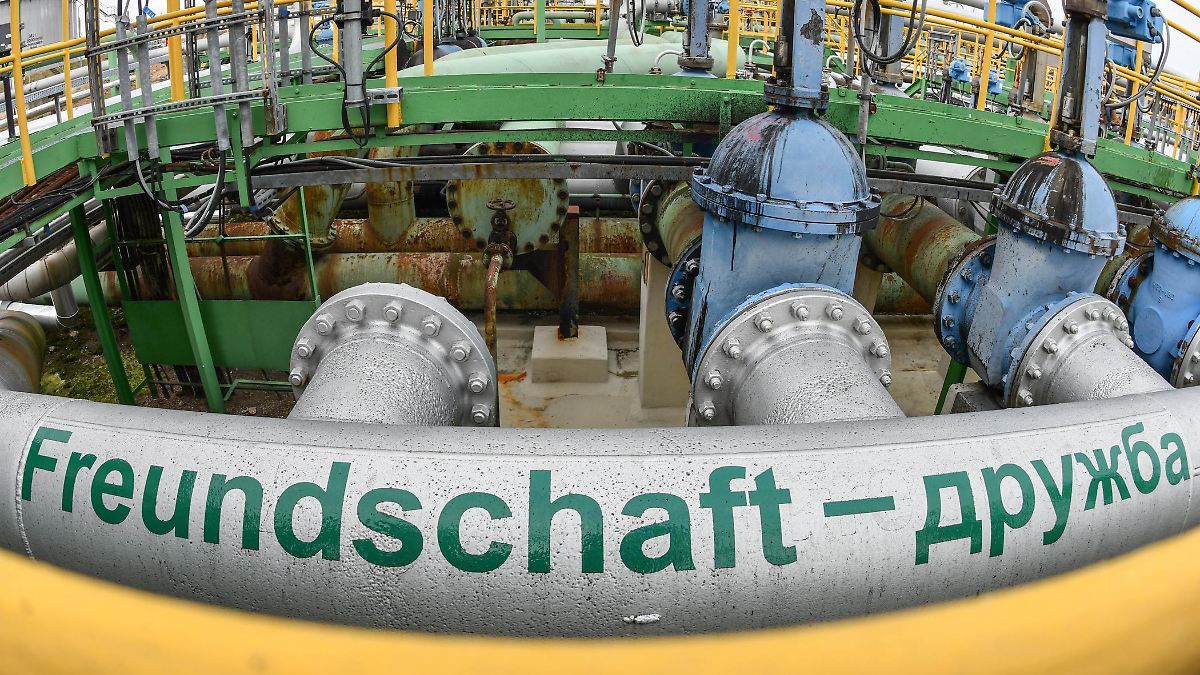 Possible delivery before the embargo
Is Putin now also turning off the oil tap?

Druzhba is Russian and means something like friendship. The name of the Druzhba pipeline, which connects Russian oil fields in western Siberia with the refinery in Schwedt, Brandenburg, more than 5,000 kilometers away, seems to belong to another era. Friendly trade has ended since Putin’s war of aggression against Ukraine. Instead, fears are growing that Russian oil will stop flowing to Germany sooner than expected.

For Russian expert Stefan Meister, these concerns are more than justified. Man urgently needs to look for alternatives, he warns in the ntv podcast “Wirtschaft Welt & Weit”. Because it is quite possible that Russian President Vladimir Putin will close the oil tap in Germany after the gas tap. It is already clear that the EU oil embargo will soon come into effect and that Germany will have to stop using Russian oil from January 1, 2023. But there are still more than three months left until the deadline. Enough time for Putin to shut off oil prematurely and thus deepen the energy crisis.

“The Russian economic model is dead”

Russia has long been one of the world’s largest energy exporters. While a lot of oil, gas and coal have flowed from there to Europe in recent years, millions of euros flow back to Russia every day. Germany built on its supposed friendship with Putin and now it has to pay the price for this dependence. Not only with the Nord Stream 2 gas pipeline, which became a billion-dollar grave, but also with oil. According to Meister, the massive price increase brought a lot of money to the Russian coffers during the transition period.

In a new episode of the “Wirtschaft Welt & Weit” podcast, Meister discusses with economist Marcel Fratzscher whether Germany is indirectly co-financing the war of aggression against Ukraine through this spending. The president of the German Institute for Economic Research (DIW) points out that Germany is already restricting imports during this period. You also need to make sure that the penalties are enforceable. All in all, Fratzscher sees the Russian economy already in recession.

As a commodity exporter, Russia is extremely dependent on imports. The supplies of machines and spare parts from Germany are now stopped due to sanctions and are weakening Russian companies more and more. It is already clear to Fratzscher: “The Russian economic model is dead”. The country will experience a massive and prolonged economic downturn unless it reverses course.

What must Germany do to continue to play an important role in the economic world of tomorrow? Who are we dependent on? Which countries benefit from the new world situation? Mary Abdelaziz-Ditzow discusses this in the ntv podcast “Wirtschaft Welt & Weit” with relevant experts.

You can find all the episodes in the ntv app or wherever there are podcasts: on Audio Now, Apple Podcasts, Google Podcasts, Spotify, Amazon Music or Deezer. You can use the RSS feed for all other podcast apps.