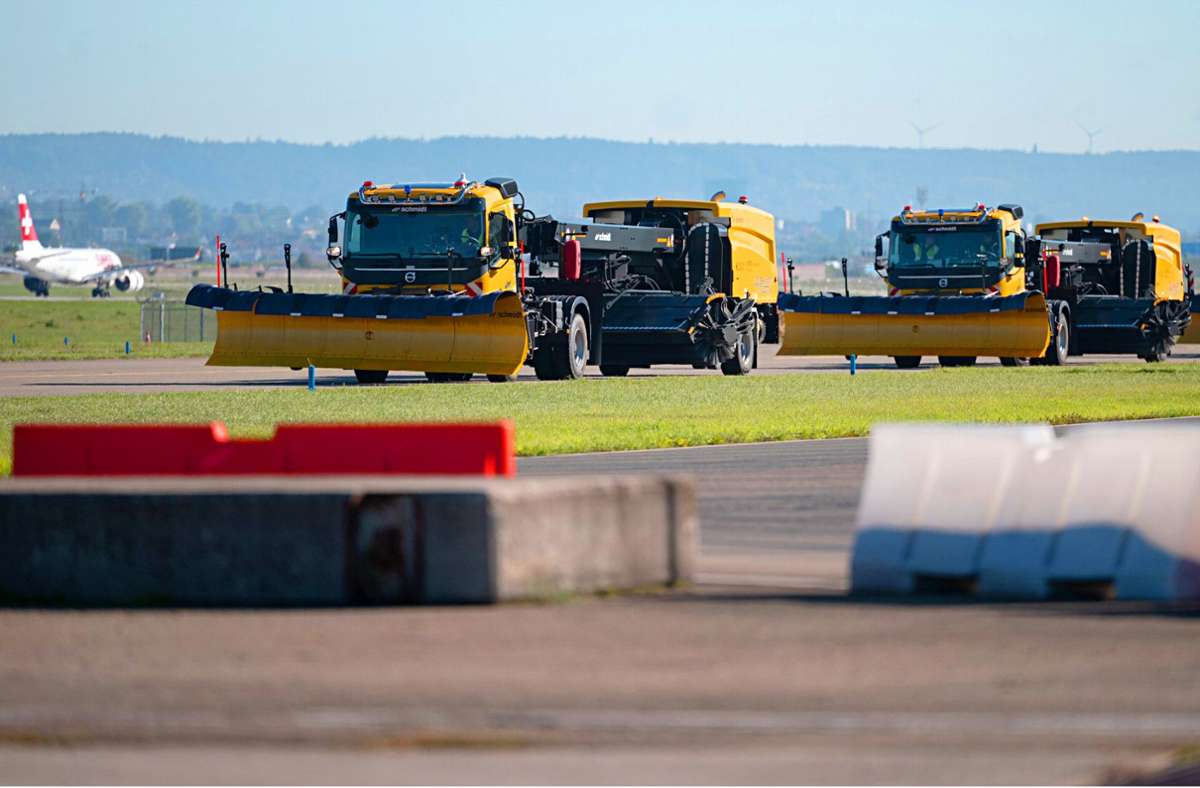 Autonomous driving is also increasingly reaching Stuttgart Airport. Starting this winter, a new type of device will be used to clear snow and ice. Is this the future?

A few clouds, mostly blue skies and pleasantly warm sunshine – at Stuttgart Airport there were no signs of wintry conditions on Wednesday, but a few winter service vehicles are still following a predetermined schedule. Because the airport company and the company Aebi Schmidt Group present autonomous vehicles intended to fundamentally change snow removal on the runway, on the taxiways and on the apron. Stuttgart Airport is now the testing ground for new winter service technology.

The two new vehicles are called Airport Sweepers because, in addition to the plow in the front, they also have a brush roller in the middle and powerful blowers in the back. The novelty of these special models is the so-called airfield pilot, developed by Aebi Schmidt. This system allows vehicles to use GPS signals from the satellite world to travel a programmed route with centimeter precision, to automatically coordinate with other vehicles in the convoy and to use the snow plow, rotary brush and blower according to a specified clearing concept – and all this without anyone in the driver’s cab.

For safety reasons, however, a man or woman sits behind the wheel during test drives so that they can intervene if the winter service machine of the future goes astray. The first experiences are of course good, according to the actors of the project within the airport company. During the first road tests, only one or two interference signals intervened in the mobile network-based system – which could give an additional impetus to the airport company to start building an independent 5G mobile network for the airport area. . This step was already planned before the corona pandemic, before the collapse of air traffic and the cost reductions of the airport company.

The new twist on the clearance will not immediately prevent all previously deployed workers from practicing their winter duties and having to wake them up at 2 a.m. after heavy snowfall and ice formation to keep the airport operational. A destiny that repeatedly exceeds up to 180 employees of Flughafen Stuttgart GmbH. As at the beginning of January 2019. Air traffic even had to be completely stopped for 50 minutes because the convoy of snow plows on the three and a half kilometer runway had to start all over again as soon as it passed.

As a rule, there are even volunteers who participate here, even if it is difficult to make their way for air traffic, often in the dark, in fog or in a snowstorm, as it is said with respect the director of the airport, Ulrich Heppe. At least some of them are now at least relieved by the ongoing automation.

This has now reached level 3, after driver assistance systems have already been introduced, as in many automobiles, says Henning Schröder, Managing Director of the Aebi Schmidt Group: the vehicles steer themselves in a large extent, and if one deviates from the program of course, they follow the others. The individual components of the winter service vehicles could already be used automatically for a certain time. But now you have a “fully integrated system” in which the truck and the hitched sweeper are controlled via the same technical platform.

The technology for this is to be tested in practice from this winter. If all goes well, it would make sense to use a fleet of six or seven vehicles. It is not yet known when this will be the case. This may be possible in two to three years, we suspect in the ranks of the FSG. This depends in particular on legal issues.

The FSG is resolutely open to new technologies. The airport operator not only uses electric cars and even passenger buses and baggage tractors on the apron, the latter has also been operating autonomously since last year thanks to its cooperation with the company VOLK in Bad Waldsee. Airport boss Heppe says they also see themselves as a platform to test new sustainable and innovative technologies.

According to Aebi-Schmidt officials, the FSG can also expect tangible benefits from the new demining vehicles later in regular operation: the airfield pilot keeps the demining team on track even in unfavorable conditions. This helps prevent accidents and reduces the effort needed to train personnel. In Scandinavia in particular, a lot of attention is paid to automation when purchasing equipment. But not only there. And a trend reversal is not even expected in the Aebi Schmidt Group due to climate change. Because even if the net amount of snow falls here and there in winter, snow and ice are still to be expected. They might be even more unpredictable than they are now. And airports shouldn’t be closed then.

project history
The automated winter service vehicles are the result of the SmartFleet project – autonomous utility vehicles for safe and efficient use of the airport”. It was launched in 2019 and funded by the Federal Ministry of Economics and Environmental Protection. The research project has a total volume of 3.9 million euros.

consortium
In addition to Flughafen Stuttgart GmbH, this also includes Volk Fahrzeugbau GmbH (Bad Waldsee), which is working on the autonomous baggage towing truck. During the three-year collaboration, the partners also studied the effects of technology on the working environment.