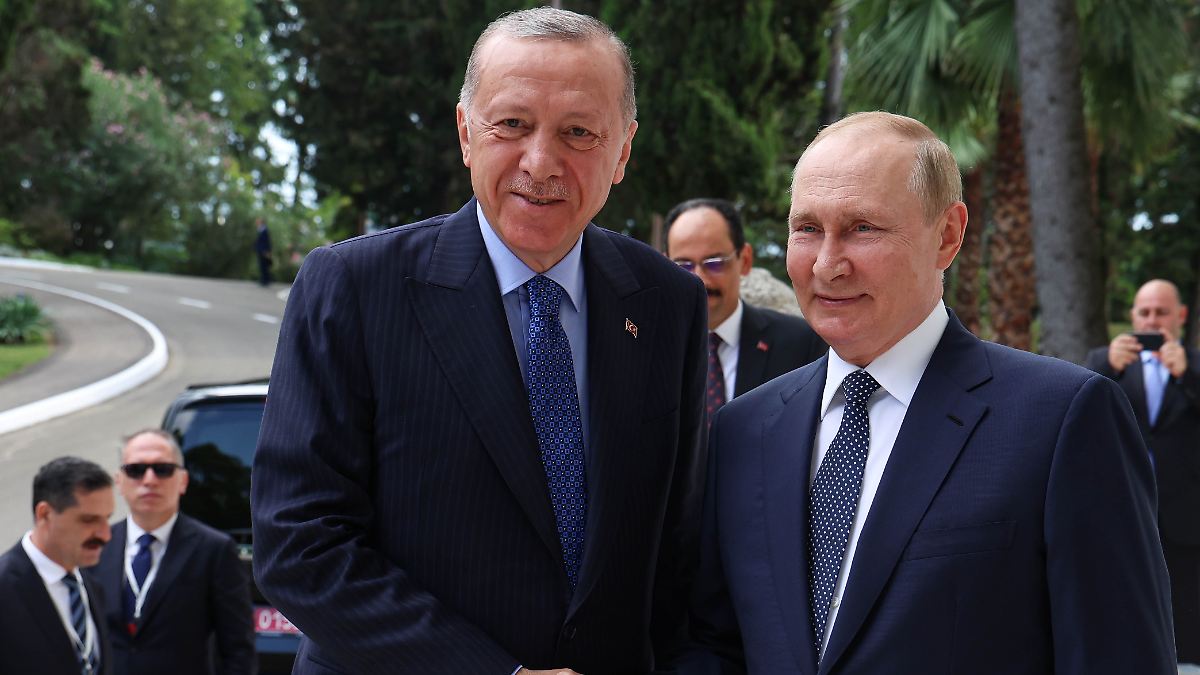 Economically, Russia and Turkey are coming closer than ever. It comes at a good time for Moscow: Turkish exports are filling the gaps left by the West. But for Ankara, the new purposeful relationship is just as important.

As the Western world turns its back on Russia, a country is getting closer than ever: Turkey. Not only is Ankara the only NATO member that refuses to sanction Russia for its war of aggression against Ukraine. The two countries also want to significantly expand their relationship “despite current global challenges” – especially in the area of ​​trade. Turkey’s membership of the Shanghai Alliance, recently announced by President Recep Tayyip Erdogan, would strengthen this. True, Russia and Turkey have not been friends in the past. Even now, Erdogan has repeatedly openly spoken out against Russia’s war in Ukraine. Yet both presidents know they desperately need their beneficial relationship.

For Russian President Vladimir Putin, the economic benefits are obvious. On the one hand, Russia has a secured gas buyer in Turkey, which it desperately needs due to its dwindling Western customer base. On the other hand, Turkish exports provide Russia with urgently needed international goods such as chemicals, food and automobiles. Because while Western companies like VW, BASF and Nestlé are closing their trade channels to Russia one by one, Turkey is expanding them at breakneck speed.

According to the Financial Times, Turkish exports to Russia increased by 46 percent compared to the previous year. The vehicle trade alone grew by nearly 60 percent, Turkish Transport Minister Adil Karaismailoglu announced in mid-August. According to the Russian news agency “Tass”, none of the approximately 3,000 Turkish companies active in Russia have announced their departure since the beginning of the war. On the contrary: Some of these companies have even set up their own export department to export to Russia, as reported by “Handelsblatt”.

No sanctions also mean no flight restrictions. Thus, Russians can easily spend their summer holidays on Turkish beaches, as Turkey is one of the last European countries to offer direct flights to and from Russia. For Russian tourists or emigrants, the Black Sea neighbor offers two advantages, economist Gerhard Toews tells ntv.de. First, they can pay with their Russian credit cards because many Turkish banks have implemented the Russian payment system “Mir” (English: peace). “Secondly, a lot of people are afraid of their money because of the political and economic situation in Russia,” continues the lecturer at the New School of Economics in Moscow. “And now they’re putting it into real estate somewhere in southwestern Turkey.” From the investment amount of 400,000 US dollars, Turkish citizenship is free.

Turkey is plugging many Russian trade gaps left by the West. However, he is not doing it out of charity towards Moscow. In fact, it desperately needs a Russian cash injection. The inflation rate exceeded 80 percent in August, the highest in 24 years. Food prices rose by more than 90 percent compared to the previous year, and the Turkish lira also lost 44 percent in value last year. “People really have huge problems coping with their daily lives,” Erdal Yalcin, who is a professor of international economic relations in Konstanz and also an expert at the Kiel Institute for the World Economy, tells ntv.de. Erdogan puts the economic situation in trouble because “he has to win the election.” Presidential and National Assembly elections will be held in June next year. The Turkish president is currently doing poorly in the polls.

Erdogan is not relying on austerity measures, but on cutting interest rates by a formally independent central bank despite high inflation. On the one hand, it serves conservative voters because interest “is ‘haram’, a sin for many Turks.” On the other hand, the already heavily indebted population could hardly afford higher interest rates. Erdogan has no choice but to focus on rapid economic growth. The problem: This requires investment from abroad, Yalcin says. “And because of the political framework and the poor financial situation, they are hard to come by.” This is where Russia comes in.

Russian tourists and Russian investments bring much-needed money into the country. The Russian nuclear company Rosatom is building a $20 billion nuclear power plant in southern Turkey. “I wouldn’t be surprised if every sector in Turkey affected by the sanctions isn’t booming right now,” Toews says. An economist who himself spent a long time in Turkey gives two examples: A house in Bodrum, Turkey, which cost 20,000 euros 20 years ago, is now worth half a million euros. Where I used to pay 250 euros for a flight from Moscow to Berlin, now I have to fly via Istanbul and therefore pay 2,000 euros on some days.”

Russia’s growing export market provides the foreign exchange Erdogan needs to cover Turkey’s trade deficit and buy the Turkish lira on financial markets. In this way, it can support the currency without raising interest rates. However, expert Yalcin still does not believe that trade with Russia will pull Turkey out of the crisis in the short term. The total volume of the Russian market is not enough for Turkey.

Moreover, the inevitable male friendship between Putin and Erdogan stands on shaky foundations. Neither of the two autocratic heads of state wants to be left out, as was recently made clear at the summit in Uzbekistan: Erdogan demanded a discount on Russian gas from Putin. The Russian head of state refused – despite close ties to Moscow, Turkey must continue to pay the price of the world market. “The topic is certainly not off the table yet,” says ntv correspondent Rainer Munz. Because Turkey is well aware of its strong base for dealing with Moscow.