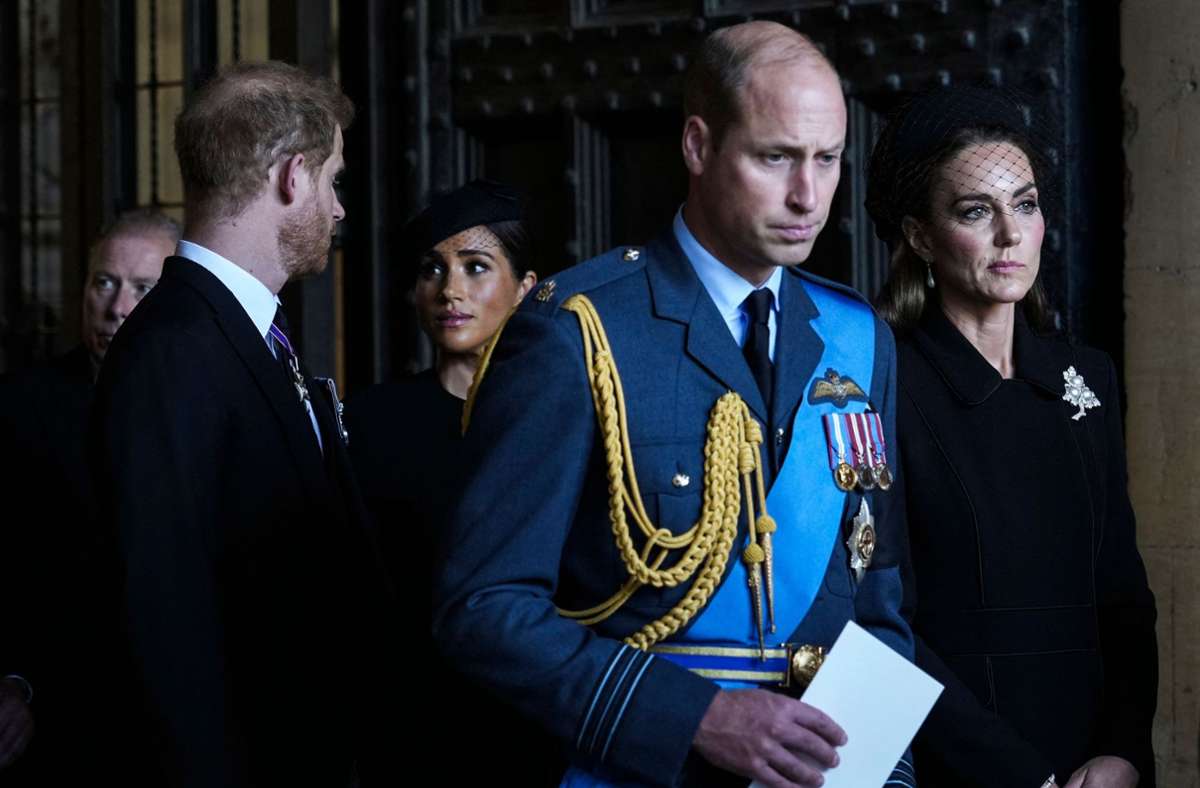 With all the pomp and circumstance, it’s easy to forget that a family also mourns the Queen. All of the Windsors bid farewell to their matriarch at Westminster Hall.

Sadness and pain were written on the face of the new Princess of Wales as she bowed her last bow to Queen Elizabeth II. Princess Kate gave a deep “curtsy” to the coffin, as she probably had done countless times during the monarch’s lifetime. Then she turned around and left Westminster Hall alongside her husband, Prince William.

Duchess Meghan did the same, standing with Prince Harry during the short service, designed to the Queen’s personal wishes, behind the new Prince of Wales and his wife in front of the coffin of the Queen who died on September 8. The Sussexes and Wales, who have put their feud aside, at least for now.

Princess Anne is the only woman behind the coffin

Harry and William had accompanied the coffin as it was carried on a ceremonial procession from Buckingham Palace to the British Parliament. Charles III, Prince Andrew, Princess Anne, Prince Edward – the Queen’s four children accompanied the procession. Traditionally, only Windsor men walk behind the casket. But Anne, the daughter of her unconventional father, was not denied the privilege (as was the case at Prince Philip’s funeral). The “Princess Royal”, a worthy successor to Elizabeth in her stoic duty, who had spent the last hours with her mother and escorted her coffin from Edinburgh to London.

Peter Phillips, Anne’s son, also attended the procession, as did her husband Timothy Laurence, the Duke of Gloucester, a cousin of the Queen and the Earl of Snowdon – David Armstrong-Jones is the Queen’s nephew, the son of Princess Margaret. These ten traveled the route from the Palace to Westminster Hall to the sound of solemn music and the chimes of Big Ben – watched by hundreds of thousands of people lining the streets.

Harry and Andrew are in civilian clothes

While most men in Windsor wore a uniform, Prince Harry and Prince Andrew had to appear in civilian clothes. Andrew for being stripped of all military titles following the Jeffrey Epstein abuse scandal. Harry, because despite his service in Afghanistan, he had to give up his military titles when he left the royal family.

The Queen’s other grandchildren were also waiting in Westminster Hall: Zara Tindall with husband Mike, Princess Beatrice and Princess Eugenie with husbands Edo and Jack, Lady Louise and James, the monarch’s youngest grandchildren. They all had tears in their eyes as they said goodbye to their beloved “grandmother”. Countess Sophie, wife of Prince Edward, seems to have been particularly affected by the death of the monarch: the Queen’s daughter-in-law was his special confidante, observers call her Elizabeth’s “second daughter”.

King Charles III, who probably hadn’t slept much in recent days, looked sad and visibly exhausted. Recently, a video of him went viral showing him visibly upset and annoyed by a drooling fountain pen. At his country estate, Highgrove, the new king now has little time to breathe and mourn in private.

As the Windsors left Westminster Hall, one thing caught my eye: As the other royal couples walked side by side, Prince Harry and Duchess Meghan immediately grabbed each other’s hands. Another sign that royal protocol no longer imposes restrictions on these two.

From now on, the queen belongs to her people for three days: the doors of Westminster Hall are now open to mourners who wish to pay their last respects to Elizabeth II. People can walk past the coffin until Monday morning. Up to two million people could come.