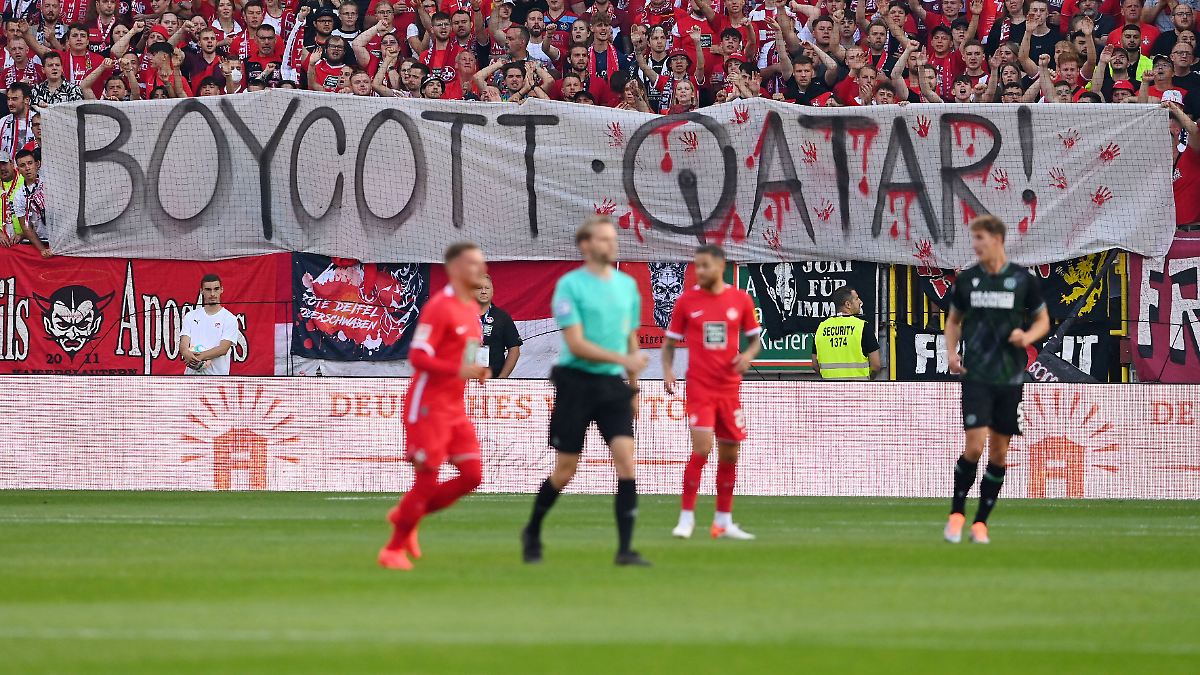 With the World Cup kicking off in Qatar in two months, exploitation, concerns about the LGBTIQ+ community and lack of compensation for migrant workers are still prevalent. Amazing scenes unfold at the DFB’s human rights congress – but is the association ready for a real sign?

“I am a man and I love other men. With these words, Dario Minden, CEO of “Unsere KURve”, as a representative of many nationally organized football fans, addressed Abdulla Mohammed al Thani, Qatar’s ambassador to Germany, at the DFB Human Rights Congress on Monday. “I have – please don’t be shocked – sex with other men,” he continues. “It’s normal. Please get used to it or stay away from football. Because the most important rule in football is: football is for everyone.”

The World Cup will be held in Qatar in two months: the human rights situation in the Gulf emirate remains poor and the shadow of abuses hangs heavily over the tournament. As Minden focuses on the dangers to the local LGBTIQ+ community, human rights organizations are repeating calls for significant reparations for workers who have died, been injured, exploited or lost their wages while building FIFA World Cup infrastructure. The DFB also wants to act – but will it stick with the statement or is the association sending a real signal?

As recently as Tuesday, Human Rights Watch warned gay soccer fans not to travel to Qatar. It is best to leave it alone, said the German director Wenzel Michalski of the newspaper “Schwäbische Zeitung”. Qatar’s message to guests and tourists to stick to the country’s traditions can be seen as a “glamorous warning,” said Michalski, which resonates: “If you experience it like Berlin-Schoeneberg, then we’ll figure something out.” ”

“Same-sex love is punishable by death”

Article 285 of the Qatari Penal Code states: “Whoever sleeps with a man over the age of 16 without coercion, coercion or subterfuge shall be punished with imprisonment for up to seven years.” Islamic law even allows flogging and the death penalty.

“I don’t know anyone who is openly part of the LGBTQ community who will be there,” Minden, who categorically refuses to travel to Qatar, told ntv.de. “For those still considering, the fact that there has been no reliable statement from Qatar that the antique laws will be suspended – not even for the weeks of the tournament – certainly speaks against it.” When he’s invited to a house party, Minden draws a comparison and there’s “an anti-gay poster in the living room, but everyone says we’re just celebrating today and not being anti-gay at all, so I keep saying goodbye.”

The local homosexuals are even worse off. In Qatar, the LGBTIQ+ community fears violence, surveillance (not only every stadium has cameras) and prosecution after the World Cup. At the DFB congress, the ambassador again addressed the speech of the fans’ representative in the subsequent closed-door discussion. “But in terms of content, I only noticed classic themes: You should come to the World Cup and make up your own mind, no one should be discriminated against,” says Minden. It’s not just about the four weeks of the World Cup: “The thing is, you can’t throw a World Cup party like this, that is, invite everyone – but same-sex love is punishable by death. Although the Qataris are right to point out, this “I don’t use it. But that’s not enough. There are enough independent reports to show how bad the situation is when it comes to deviation from the direct norm in Qatar. It’s a huge mess.”

dead “that we may rejoice together”

Qatar’s ambassador al Thani admitted on Monday that the situation was “not ideal yet”, called for his country to be treated fairly as a World Cup host and squared off with Russia as the host of the tournament in 2018. “Classic ‘Whataboutism’,” says Minden. However, “Eurocentrism, finger-pointing and sometimes disparaging views of the West on the Arabian Peninsula” would not help either. The West is partly to blame for the situation in Qatar because it is not doing enough to counter the “global machinery of exploitation” and only then would many guest workers from their home countries “enter Qatar’s precarious and potentially cruel kafala system. “.

Human Rights Watch, Amnesty International and FairSquare continue to push for workers or at least their families in Bangladesh, Nepal or the Philippines, if they die, to be compensated by FIFA and Qatar for their exploitation. But nothing has happened yet. It can’t be about money that the two are fighting. Human rights organizations are now calling on World Cup partners and sponsors to increase pressure on the world association and the emirate. They announced that they had written to 14 World Cup sponsors and partners asking them to take action, but had only received four pledges of support for such financial compensation.

The shadow of abuse. At least 6,500 migrant workers lost their lives building the $220 billion World Cup infrastructure (including stadiums, airports, roads, public transport and about 100 hotels). Craig Foster, the former captain of the Australian national football team, calculates in the “Sydney Morning Herald” based on the 169 goals scored at the World Cup in Russia, that “about 39 lives were lost” for every goal scored. Just “so we can shout, cheer and celebrate together.” Amnesty International reports 15,000 workers have died since the tournament was awarded to the desert state. The country’s reforms are insufficient for human rights organizations and come after thousands of people have died.

“Sometimes you have to give up profits”

Do the German national team and DFB officials think of the families of the deceased when they arrive, when they celebrate a goal, when they can finally lift the World Cup trophy into the evening sky? Do footballers have a duty to speak up – for families who have suffered so professionals can play football?

For a long time, the association has been reticent about human rights and avoided clear statements, although the DFB was of course also involved in the process of awarding the tournament to Qatar. In the past year, there has finally been a change of heart. DFB president Bernd Neuendorf told the congress on Monday that it would be necessary to set up “job centers” to which workers could turn in the event of violations by employers. Neuendorf also called for a fund for workers who died or were injured during the construction of World Cup stadiums. FIFA is to blame.

important words. But will he remain with such declarations, with such demands? Because if Minden gets out of “Our curve”, the DFB should activate itself. “Sometimes it’s hard with statements because you have to back them up with attitude and action when the going gets tough,” she says. “Sometimes you have to give up gains to stay strong.” Minden understands footballers who want to focus on the tournament. But: “They are making money for a World Cup that has been created through blatant exploitation. With every euro that comes to you during the tournament, you should think: Is it right to accept this euro in these circumstances – or should it be a better benefit? deprived suffrage?”

Even if the World Cup in Qatar starts in two months, even if the shadow of abuse is increasingly looming over the tournament, even if it is quite late: the national team still has a chance to send a strong signal. It is too late for a boycott, as Joshua Kimmich said on Tuesday. But what a far-reaching symbol, what a relief for the suffering workers and their families, it would be if the Bayern professional and his DFB-Elf colleagues announced their World Cup bonuses in a fund set up especially for the suffering.

If that happens in the next two months, the team could fully focus on football after this sign at the World Cup. However, the World Cup in Qatar remains “a prime example of ‘sports washing’,” explains Dario Minden for ntv.de, and football must ask itself “which carts it can be hitched to and whether the required polishing of the image is mandatory.” got”.

Dead guest workers, human rights violations, persecution of the LGBTIQ+ community: At the DFB Minden congress, he told the association and the Qatari ambassador that he was ashamed to be a person who loves football. He was ashamed “of the honesty of our beloved sport at the top. Whether for the bloody exploitation that is being carried out just so that a soccer tournament can take place.” By the way, starting Saturday, Chancellor Olaf Scholz will be on the ground in Saudi Arabia and Qatar to win some energy deals. We will see if he will also find such clear words about the situation in the field of human rights.