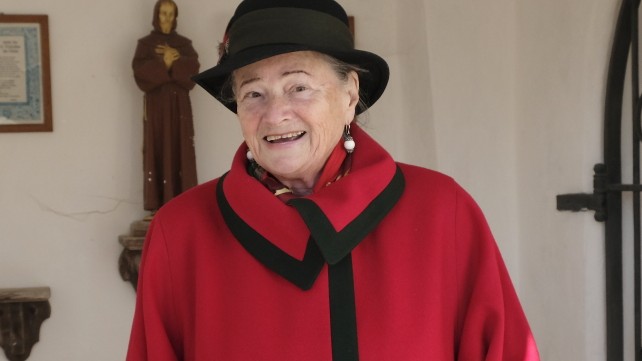 It is thanks to the woodcutter that the Königsdorf church was not built in the Brand Wilderness. The man who was supposed to supply the beams for the church broke his leg with every blow, although he was otherwise a skilled craftsman. The doves brought the bloody logs to the very spot where Saint Lawrence is enthroned today. Is this correct? That’s not what’s important in Gisela Schinzel-Pent’s Sayings and Legends of Tölzer Land and Isarwinkel. It is about not forgetting the old stories and bringing people closer to the environment in which they live. The story doesn’t have to be full length. The episode of the Königsdorfer Holzknechts is only nine lines long and can be found in the fourth and enlarged edition of your Tölzer Sagen book, now published.

The 75-year-old resident of Munich is a passionate collector. Over the past 55 years, he has written more than 2,000 myths and legends and published them in 14 books. He is not afraid that the material may run out. “It will never end,” he says. People kept calling him and telling him something new. He has collected almost 220 stories about the Tölzer Land and the Isarwinkel in the fourth edition, which at 311 pages is considerably thicker than its predecessor. From Jachenau and Langris it runs through Geisach, Tolz and Dietramsel to Sachsenkamm, Königsdorf, Heilbrunn, Benedictbeuern, Koschel, Schlehdorf, Großweil and Walchensee.

Schinzel-Pent, who was born in Munich in 1946, worked as a teacher for several years after his education, but then decided to become a freelance writer. His area is fairy tales, folklore and local research. She is married to architect Heinz Schinzel, who contributed ten pen and ink drawings to the book. Detailed commentary, location information, and historical notes and comparisons complement the stories. If you’re wondering what a spruce ball is good for or why you should push yourself through a rock, Gisela Schinzel-Pent knows the answer.