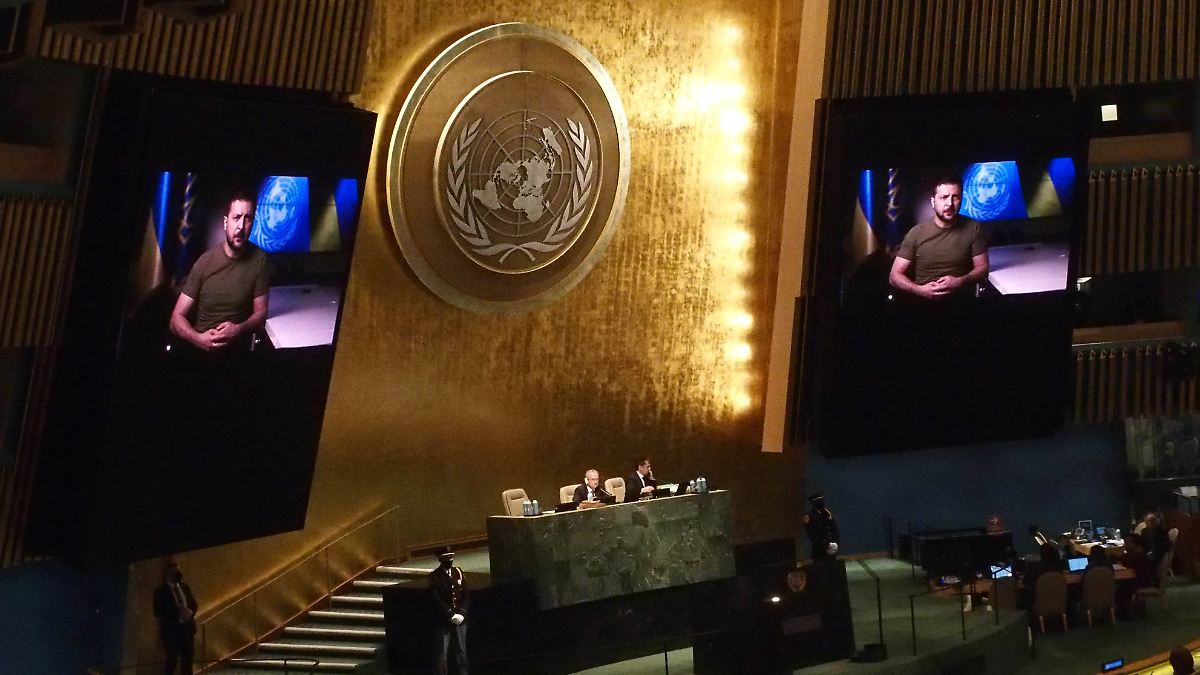 The desired punishment of Russia
Zelenskyj: “Radiation blackmail” makes everyone a target

In his speech at the UN General Assembly, Ukrainian President Zelenskyy calls on the international community to punish Russia for the war in Ukraine. With regard to the situation in the attacked Zaporizhia nuclear power plant, it urgently warns of a nuclear disaster.

Ukrainian President Volodymyr Zelenskyy has asked the United Nations to punish Russia for a war of aggression against his country. “A crime was committed in Ukraine and we demand punishment,” Zelenskyy said in a video message to the UN General Assembly in New York. Russia must be punished for the killing, torture, humiliation and catastrophic unrest it has plunged Ukraine into.

This year’s general debate at the UN General Assembly is dominated by Russia’s war of aggression. Zelenskyi was the only one of more than 140 heads of state and government to speak there via video message. He was exempted from the board because of the Russian war of aggression.

The president used his speech to call on the international community for more military support for his country. “We can return the Ukrainian flag to our entire territory, we can do it with weapons, but we need time,” Zelenskyy said. More support is needed for both defense and offense as well as more financial assistance.

Ukraine has been fighting a Russian invasion since February 24 and recently managed to retake large swaths of territory from the occupiers. Zelenskyi also called for further visa restrictions for Russian citizens. They should not be allowed to travel to other countries for shopping and vacation, he demanded. Ukraine also wants to establish an international compensation mechanism and hopes for UN support. “Russia should pay for this war with its wealth,” he said.

Zaporozhye that “everyone is a target”

By issuing an urgent warning about the situation at the attacked Ukrainian nuclear power plant Zaporizhia, Zelensky made it clear that the war is not only a danger to his own country. Russian actions there “make all of you a target,” Zelenskyy said. “Russian radiation blackmail is something that should concern all of you” because no one will have a vaccine against radiation sickness.

The Zaporozhye nuclear power plant has been under Russian control since the beginning of March. With its six reactors and a net output of 5,700 megawatts, it is the largest nuclear power plant in Europe. Moscow and Kyiv accuse each other of shelling the facility. An accumulation of incidents that led to reactor shutdowns and power outages raised international fears of a nuclear disaster.

According to Zelensky, there cannot be a neutral position in the war. “Anyone who talks about neutrality when human values ​​and peace are under attack means something else,” Zelenskyy said. Anyone talking about neutrality here would actually mean indifference. “They act as if they are interested in the problems of others. They formally take care of themselves, they only show sympathy for protocol reasons,” he criticized countries that do not want to take a clear position in the conflict. “They pretend to protect someone, but in reality they only protect their own interests. Such an attitude creates the conditions for war. And such an attitude needs to be corrected in order to create the conditions for peace.