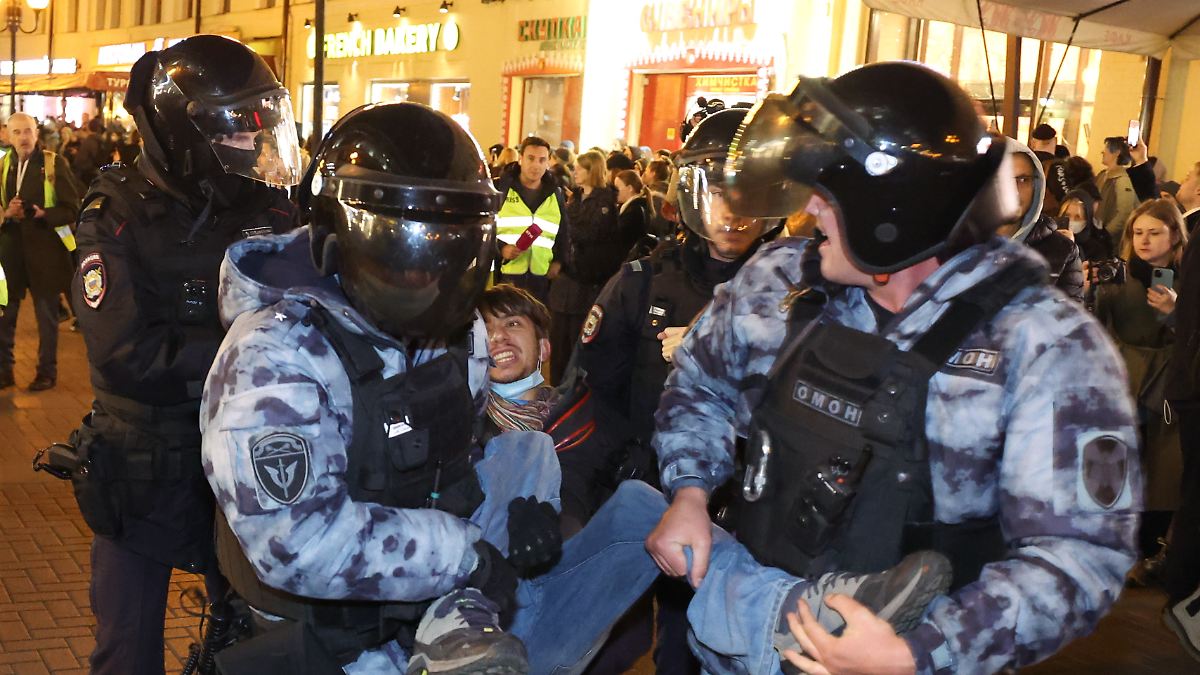 Kremlin chief Putin orders the partial mobilization of Russians of military age and threatens the West and Ukraine with the use of nuclear weapons. Protesters who do not want to be dragged into the war in Ukraine are being arrested en masse. Because of the threats, Kyiv sees time for further arms deliveries. The 210th day of the war in brief:

During protests against partial mobilization in Russia, the number of nationwide arrests rose to 1,250. This is explained by the organization OVD-Info, which documents arrests in Russia. Journalists from the AFP news agency observed dozens of arrests in the capital Moscow and the second largest city of St. Petersburg in the evening. At least 50 people were arrested on a central Moscow shopping street alone, according to the report, with a total of about 455 people in the capital, according to the list. In St. Petersburg, police round up small groups of protesters and then arrest them one by one. There are said to be around 500 arrested. Demonstrators shout “No to war” and “No to mobilization”. “Everyone is afraid,” says protester Vasily Fedorov in St. Petersburg. “I’m for peace and I don’t want to shoot.”

Kuleba: The only answer to Putin’s threats – double support for Kiev

Faced with Russian President Vladimir Putin’s threats to use nuclear weapons in the Ukrainian war, Kyiv called for more help. “The only appropriate response to Putin’s aggressive threats is a doubling of support to Ukraine,” Ukrainian Foreign Minister Dmytro Kuleba said. More sanctions against Russia and greater determination to hold Moscow accountable are needed. In addition, Kuleb called for more weapons for Ukraine and greater solidarity with his country.

With the prospect of war, there was a rush in Russia for tickets for international flights. According to Aviasales, a booking website popular in Russia, all direct flights to the nearest former Soviet republics of Armenia, Georgia, Azerbaijan and Kazakhstan are fully booked. Turkish Airlines has announced that seats to Istanbul, one of the main hubs for flights to and from Russia, will not be available again until Saturday. According to the Serbian airline, the next AirSerbia flight to Belgrade will not be available again until Monday. Even domestic flights to border cities are in high demand: tickets from Moscow, for example, to the city of Vladikavkaz on the border with Georgia now cost over $750 – more than ten times the usual price. According to the online service Google Trends, the search terms “air tickets” and “airplane” have been entered on the Internet twice as often as usual in Russia since early morning.

Zelenskyi: Soldiers are fleeing from Russia

The announced partial mobilization in Russia, according to Ukrainian President Volodymyr Zelensky, shows that Moscow has problems with its military personnel. “We already know that they mobilized cadets, guys who didn’t know how to fight. These cadets fell. They couldn’t even finish training,” Zelenskyy said in an interview with “Bild” newspaper. They came to Ukraine to die. Russian President Vladimir Putin needs an “army worth millions” but sees “his troops just running away,” Zelenskyy said. Putin wants “to drown Ukraine in blood, but also in the blood of his own soldiers.”

Even after the announcement of partial mobilization by Russia, Defense Minister Christine Lambrecht does not see a reason for direct deliveries of battle tanks from Germany to Ukraine. “Ukraine will now receive tanks delivered very quickly, namely 40 tanks from Greece, 28 from Slovenia, and Germany will then help close these gaps in both countries,” Lambrecht said in the evening on the “ZDF Spezial” program. In addition, Ukraine will continue to be supported by “very effective” German weapons systems such as self-propelled howitzers and multiple rocket launchers – “now more than ever”. Lambrecht emphasized that no additional training is required for any of these weapons. “It is very important that Ukraine now acquires weapons that can be immediately used to fight.”

Scholz and the EU see “desperation” in partial mobilization

Chancellor Olaf Scholz and the European Union took the announcement of partial mobilization as a sign of “desperation”. With its latest decisions, Russia is “making everything much worse,” Scholz said on the sidelines of the UN General Assembly in New York. “Russia cannot win this criminal war,” the chancellor said. Putin “completely underestimated” the situation from the beginning. US President Joe Biden also criticized “irresponsible nuclear threats to use nuclear weapons. A nuclear war cannot be won and must never be fought.” Moreover, Russia has “brazenly” violated the basic principles of the UN Charter with a war of aggression.

Zelenskyj: Human lives are saved by the delivery of tanks

Ukrainian President Volodymyr Zelenskyy once again urged Germany to supply his country with battle tanks. “Give us these weapons,” Zelenskyy said in an interview with Bild TV. “For us today, battle tanks mean that more lives can be saved,” the president emphasized. Zelenskyi did not accept the German government’s argument that it did not want to act alone. “You are an independent state. If you don’t want to give us these weapons, no offense, you have your opinion. But don’t say: first the USA, then Poland and so on.” The Bundestag is also discussing the support of Ukraine with heavy weapons on Thursday afternoon.

Kremlin dissident Alexei Navalny, who has been imprisoned in a penal camp, complained during a court hearing that President Vladimir Putin’s “criminal war” was getting worse and worse. Putin wants to involve as many people as possible in the bloodshed in Ukraine, Navalny said at a hearing on his prisoner rights. “To extend his own power, he is tearing apart a neighboring country, killing people there. And now he is throwing a huge number of Russian citizens into a meat grinder,” Navalny said.

Putin announced the possible annexation of Ukrainian territories using mock referendums in the occupied territories. “We support the decision of the majority of citizens in the Luhansk and Donetsk People’s Republics, in the Kherson and Zaporozhye regions,” Putin said. In addition to the self-proclaimed people’s republics of Donetsk and Luhansk in eastern Ukraine, the Russian-occupied regions of Kherson and Zaporozhye in the south also want a vote to join Russia. Simultaneous mock referenda will be held from 23 to 27 September. They are seen as a reaction to the current Ukrainian counter-offensive in the east of the country.

The Ukrainian operator of the Zaporizhia nuclear power plant has accused Russia of renewing attacks on the plant. The nighttime shelling damaged power lines, several transformers in reactor 6 then failed and the emergency generators started “briefly”, Energoatom said on the Telegram messenger service. However, the radiation load in the plant is at a normal level, and radioactive emissions into the environment are also below the limit values.

Other texts about the war in Ukraine:

You can read all further developments in our live ticker.